The Kolkata Knight Riders (KKR) received their first defeat of the seasons while facing Chennai Super Kings (CSK) in the lion’s den where they haven’t had a good track record. Despite posting a good total of 202 in the first innings, thanks to Andre Russell, KKR failed to stop the men in yellow under that. The yellow army of CSK fans around the stadium was a sight to watch.

KKR all-rounder Andre Russell was battling with fitness issues before the start of the IPL. A big knock was surely due from his side for KKR and the team needed him to step up on the occasion. He delivered a clinical performance but it wasn’t enough to stop his team from slipping to a five-wicket defeat.

IPL is a platform where cricket is played at it’s very best but apart from that, the players are also known to have a fun time off the field too. The swashbuckling all-rounder Russell along with Sunil Narine, Shubman Gill, and Kamlesh Nagarkoti was seen dancing with the Bollywood superstar and KKR owner – Shah Rukh Khan. The players were shaking their legs on the tunes of famous SRK song “Wanna Be My Chammak Challo”.

Russell took to Instagram to post the video and captioned it as: “Fun time with the boss himself! #SRK”.

Fun time with the boss himself! #SRK

Russell was one of the two players to be retained by KKR ahead of the IPL 2018 players’ auction despite the fact that the team management had undergone a major overhaul to their squad. Long-term serving skipper Gautam Gambhir moved to Delhi Daredevils and Dinesh Karthik was named the captain of the side. KKR’s fortunes rely heavily on the Andre as the squad does not long as strong as it was in last season. KKR already suffered a huge setback when Mitchell Starc was ruled out of the IPL due to an ankle injury.

The Caribbean all-rounder smashed a four and 11 sixes in his phenomenal knock. Chennai’s batting line-up though proved to be too strong as they chased down the gigantic target with one ball to spare with Sam Billings being the star for the hosts. 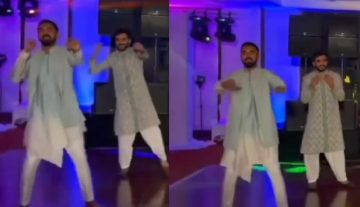