The Delhi Capitals (DC) pulled off a close win of two wickets against the Sunrisers Hyderabad (SRH) in the Eliminator in Visakhapatnam. The game went ended on the penultimate ball of the match and it was no less a humdinger, even in the last over, Amit Mishra got out obstructing the field. In the end, it was the Delhi, who managed to seal a win. After the triumph, DC will now face the Chennai Super Kings (CSK) on Friday, May 10 in Vizag itself.

Vijay Shankar and Mohammad Nabi were utilizing the final overs of the match quite well as they scored 36 runs in just 15 balls but Shankar got out in the penultimate over of Trent Boult, before which he had smashed the bowler for a six and a four. However, the real drama took place in the final over of Paul after the dismissal of Nabi.  Eventually, SRH reached a total of 162/8 in their quota of 20 overs despite losing three wickets in the final over.

During the chase, the DC openers, Prithvi Shawam, and Shikhar Dhawan came out all guns blazing as they scored as many as 55 runs in the powerplay without losing any wicket. However, the latter got out in the 8th over of Hooda while attempting a fancy shot coming down the track. Shaw, who scored his fifty in 34 balls started building a partnership with Iyer but only managed to add 18 runs as Khaleel Ahmed dismissed both of them in the 11th over reducing Delhi to 87/3.

Rishabh Pant and Colin Munro were going good after those dismissals, but Rashid Khan bowled a double-wicket maiden to dismissed Munro and Axar Patel in the 15th over. However, Pant kept his calm when DC needed 34 runs in the last three overs as he smashed  21 runs in five balls of the 18th over delivered by Basil Thampi.

In the penultimate over, Bhuvneshwar Kumar dismissed the Pant and Sherfane Rutherford, then, Delhi needed just 5 runs in the final over. However, the equation came down to 2 runs in 3 balls and then Amit Mishra got out while obstructing the field, but, eventually, Keemo Paul smacked Khaleel for a four through deep mid-wicket to win DC the game with a ball to spare and two wickets in hand.

Here is how Twitter reacted to the nail-biting game:

Bowling Thampi in 17th over leaving khaleel turned out to be costly. DC make it to the qualifiers 2 for the first time in @IPL. What a season it has been for the youngest IPL team. #IPL #IPL2019 #SRHvDC #BadriBytes

Why do it easy when tough is possible!!!! #DC are through. But not without raising heartbeats. Well done 👍 the three best teams of the #IPL are the last three standing. #DCvSRH

What a match. What a tournament @IPL is. Well played Delhi and exceptional knock from @RishabPant777 – The gamechanger #DCvSRH

Obstructing the field , right decision made🧐3rd super over of this? #IPL #IPL2019 #SRHvDC

How is @RishabPant777 not in India’s Wcup squad?!!! Heck of a talent…& game changer of serious note! 👊🏻💥👏 #special #IPL #entertainer

Hats off to the Afghan boys…great skills and great temperament in one great package. 👏👏👏🙏🙏#RashidNabi

Keemo Paul in final over:

You can fret over @RishabPant777 throwing it away with victory in sight but chew on this: isn’t it 4th game he’s won from a very difficult situation for @DelhiCapitals this season. Should have been on the plane to UK #DCvsSRH 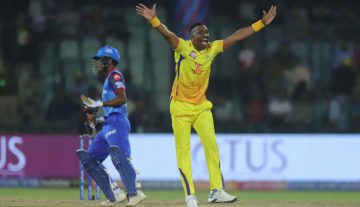