Former Indian skipper, MS Dhoni is fit and fine at the age of 37. The age at which most of the cricketers starts thinking to hang their boots from competitive cricket. More like any other cricketer, he has faced a lot of ups and downs, but he has managed to dust himself pick himself up from the pits every other time. Regarded as the ‘best finisher’, he doesn’t seem to give up the ghost any time.

Quite expectantly, Dhoni has always been an inspiration to most of the fans as well as for his fellow cricketers. It has often been seen that he has enjoyed admirers from every corner of the cricketing fraternity. Many aspiring players have taken some inspiration from the veteran cricketer to find their way in the cricketing fraternity. Recently, the flamboyant Indian all-rounder, Hardik Pandya was seen showering praises on the legendary figure.

Hardik took to his official Instagram account and uploaded a picture along with Dhoni. Moreover, he captioned the picture and wrote, “My inspiration, my friend, my brother, my legend @msdhoni

Hardik was elated as his team Mumbai Indians (MI) qualified for the Final of the 12th edition of the IPL. The franchise, under the leadership of Rohit Sharma, defeated the Chennai Super Kings (CSK) for the third consecutive time this season. Suryakumar Yadav’s 71 off 54 balls with 10 boundaries helped Mumbai get over the line at the MA Chidambaram Stadium.

In the first innings of the game, Hardik got to bowl just a couple of overs, but he conceded just 13 runs. During the run-chase, he came to bat when MI needed 31 runs off six overs. Hardik ended with 13 off 11 with one four. Mumbai chased down the target with nine balls to spare. On the other hand, CSK and Dhoni have to do some real hard work in order to win the second Qualifier on Friday, May 10. 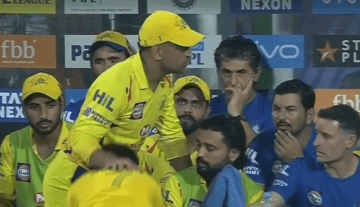