On Monday, the BCCI announced that the final of the ongoing edition of the Indian Premier League (IPL) is set to take place at the Rajiv Gandhi International Stadium in Hyderabad on Sunday, May 12. The venue was expected to host the Eliminator and Qualifier 2, but elections on May 6, 10 and 14 meant that there won’t be adequate security for the matches and the same was confirmed by the police.

The final was earlier scheduled to take place at the Chepauk Stadium in Chennai, the venue of the defending champions Chennai Super Kings (CSK), but it wasn’t possible due to the non-clearance of the three stands at the venue. Hyderabad is also left with one match in the league stages and that’s between the hosts Sunrisers Hyderabad (SRH) and Kings XI Punjab (KXIP) on Monday, April 29.

Meanwhile, the stadium in Hyderabad will soon be facing a huge issue as a gale force blew away a major portion of the canopy at the South-end on the Grand Stand late on Monday evening. According to the recent reports in Sportstar, the officials might have to make alternative arrangements for the canopy at the earliest. They can also peel off the canopy with the floodlighting as well.

Back in 2013, the Hyderabad Cricket Association (HCA) had to install makeshift towers under the canopy at the Southern Stand and it cost them 32 lakhs. The same was the case with the two floodlit towers blocked by the canopy. Back on February 21, 2011, the work on the canopy at the South and North ends began after an agreement between the HCA and the M/s Star Mercantile, costing 21 crores.

At the present point of time, the officials aren’t sure whether there is any kind of insurance cover for such damage. It goes without saying that not much time is left before the final and a solution needs to be brought forth. As far as the team is concerned, SRH, under the captaincy of Kane Williamson, is at the middle of the points table with five victories from nine contests. 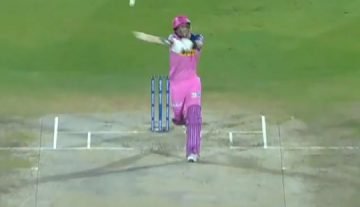