On Saturday, the cricket fans at Delhi witnessed a humdinger of a game between Delhi Capitals (DC) and Kolkata Knight Riders (KKR) as the hosts win the game in the super over. In the first innings, the visitors set a target of 186 runs in front of the hosts, but the latter tied the game despite needing just 6 runs in the final over.

Earlier in the game, after winning the toss, the DC skipper, Shreyas Iyer asked the KKR skipper, Dinesh Karthik bat first. While KKR making one change to their squad as Sunil Narine made way for Nikhil Naik. Delhi made as many as four changes as Keemo Paul, Rahul Tewatia, Axar Patel, and Ishant Sharma made way for Hanuma Vihari, Chris Morris, Sandeep Lamichhane, and Harshal Patel.

The Super Over where KKR lost

Kagiso Rabada gave the best testimony of how to bowl yorkers as Delhi edged out Kolkata in a Super Over, denying the visitors a hat-trick of wins, to seal their second win in the IPL 2019 at the Feroz Shah Kotla. KKR needed 11 runs to win in the Super Over but only managed to score six runs as Delhi, who were any which ways looking like a winner of the game, eventually managed to win the match in the Super Over.

In Delhi turn, Rishabh Pant came to bat with skipper Iyer. But the latter got out still they managed to score 10 runs as all of them were scored by Pant. Then came out to bat Karthik and Andre Russell for KKR. Rabada bowled some deadly yorkers to get Russell on the third ball, before which he smashed a four, however, eventually they lost as they only managed to score 3 runs in last three balls.

Chasing 186 runs to win, the young prodigy Prithvi Shaw missed out on his maiden IPl century as he was dismissed on the score of 99 runs and skipper Shreyas Iyer‘s 43. Shaw, though, kept the scoreboard ticking after Dhawan’s dismissal and just when it seemed like a century was for the taking, but he got out on Lockie Ferguson’s bowling.

The crucial final over of Kuldeep

Delhi were still in control as it came down to scoring six runs off the final over. However, Kuldeep Yadav had some other plans as he made Delhi lose their nerves as the last two wickets on last two balls, and the match resulted in a super over. Requiring 2 runs of two Ball Hanuma Vihari went for a slog over deep mid-wicket only to get it caught by Shubman Gill on the boundary and leaving the equation 2 off 1 and attempting a double on the final ball, Colin Ingram got run-out.

Earlier, Andre Russell came to the party for the third time in a row and Dinesh Karthik led from the front as Kolkata recovered from an early collapse and scored 185 after put in to bat by Delhi. The West Indian hammered 62 off 28 balls, hitting 6 sixes and 4 fours before being dismissed by Chris Morris in the 18th over.

Kolkata skipper, Karthik, meanwhile, scored 50 off 36 balls during which he smashed 5 fours and 2 sixes. While Dinesh could not stay till the end after being dismissed by Amit Mishra in the 19th over, his knock, along with Russell’s attack kept them in the game. 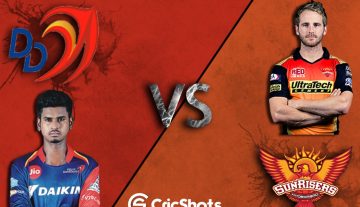