The Sunrisers Hyderabad (SRH) was locking horns with Delhi Capitals (DC) at the Rajiv Gandhi Stadium in Hyderabad. After winning the toss, the SRH skipper, Kane Williamson asked the visitors to bat first. However, the hosts started on a rough note as both their openers, Shikhar Dhawan and Prithvi Shaw, still, they managed to win the game by 39 runs.

Both the opening wickets were taken by Khaleel as he dismissed Shaw in the 2nd over followed by Dhawan in the fourth. After their dismissal, Munro along with Iyer added 49 round for the third wicket before the former getting out to the young Abhishek Sharma in the 8th overs. However, before getting out, Munro smashed Sharma for a huge six over long-on.

WATCH – Bhuvneshwar Kumar Had The Last Laugh Against Keemo Paul

After that, Rishabh Pant came out to bat and he added 56 runs with Iyer for the 4th wicket before the latter getting out in the 16th over by Bhuvneshwar Kumar. In the next 8 runs, Delhi lost two more wickets of Pant and Chris Morris by Khaleel and Rashid Khan respectively. Keemo Paul and Axar Patel helped Delhi to reach the total of 155/7 in their quota of 20 overs.

WATCH – Abhishek Sharma Gets A Six And Out Against Colin Munro

During the chase, both the SRH openers, Jonny Bairstow and David Warner came out all guns blazing as they added as many as 72 runs for the first wicket before Bairstow getting out in the 10th over by Paul. After his dismissal, Williamson also got out 12th over leaving SRH at 78/2 after 12 overs. For the third wicket, Warner and Ricky Bhui added 23 runs for runs, before the latter getting out in the 16th over.

After Ricky’s dismissal, SRh never managed to get back in the game as they needed around 55 runs in the last 5 overs and in an attempt to up the ante, the hosts kept on losing wickets in the regular interval as they got bundled out for 116 in the 19th over. SRH lost two wickets in the 17th over of Kagiso Rabada, three wickets in 18th over of Chris Morris, and again in the 19th over of Rabada they lost the last two wickets as well. On all the three overs, both the bowlers had the chance of taking a hat-trick. 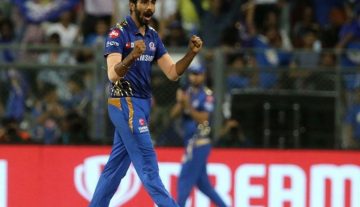