Currently, the Sunrisers Hyderabad (SRH) are locking horns with Delhi Capitals (DC) at the Rajiv Gandhi Stadium in Hyderabad. After winning the toss, the SRH skipper, Kane Williamson asked the visitors to bat first. However, the hosts started on a rough note as both their openers, Shikhar Dhawan and Prithvi Shaw got dismissed in the first 20 balls itself.

During the toss, the DC skipper, Shreyas Iyer revealed that they have made a couple of changes in the squad as Colin Ingram and Rahul Tewatia made way for Colin Munro and Amit Mishra. On the other hand, SRH made as many as four changes in the squad as Mohammad Nabi, Yusuf Pathan, Manish Pandey, and Siddharth Kaul made way for, Williamson, Ricky Bhui, Abhishek Sharma, and Khaleel Ahmed.

Both the opening wickets were taken by Khaleel as he dismissed Shaw in the 2nd over followed by Dhawan in the fourth. After their dismissal, Munro along with Iyer added 49 round for the third wicket before the former getting out to the young Abhishek Sharma in the 8th overs. However, before getting out, Munro smashed Sharma for a huge six over long-on.

WATCH – MS Dhoni Gets A Huge Reception In Kolkata

Abhishek was bowling his first over and on the penultimate ball of the over, Munro came down the track and the ball was in the slot and his clobbered it over long-on boundary for a huge six.

Here is the video of the six:

On the very next ball, Sharma completed the over with the last laugh as he delivered a leg-cutter with back-spin and it was wider of the stumps too, and Munro wants to slap this hard, but the back-spin took the ball a bit away and it got a thin edge through to the keeper and Jonny Bairstow made no mistake. 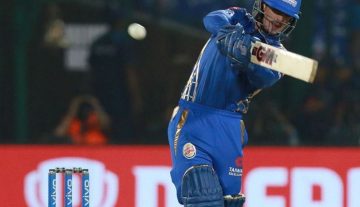