The Delhi Capitals (DC) hosted Rajasthan Royals (RR) in the 54th game of the ongoing season of the Indian Premier League (IPL) at the Feroz Shah Kotla. After winning the toss, the RR skipper, Ajinkya Rahane chose to bat and his decision back-fired as they suffered a huge loss by five wickets.

Rajasthan lost their skipper in the 2nd over of the game as Ishant outplayed him with a slower ball and Shikhar Dhawan took a comfortable catch at fine leg. In the next over of the Ishant, RR lost Liam Livingstone as well as the bowler cleaned him up on the penultimate ball of the over.

However, a huge mix up took place between Mahipal Lomror and Sanju Samson on the second ball of the 5th over of Axar Patel which ended in the dismissal of the latter. Soon after that, RR was struggling at 57/4 at the end of the 11th over and the troubles increased further in the 12th over of Amit Mishra who dismissed Shreyas Gopal and Stuart Binny on back-to-back deliveries.

Mishra almost completed the hat trick as well on the 4th ball of the over, but Trent Boult dropped the catch of Gowtham. Eventually, RR managed to play out the 20 over with the help fo maiden IPL fifty by Riyan Parag as they scored 115/9.

During the chase, Delhi lost both their openers, Dhawan and Shaw in the 4th over itself as Ish Sodhi got both of them on back-to-back deliveries in his first over itself. However, in the very next over, Iyer smashed Sodhi fir back-to-back sixes and it seemed like an act of revenge, but he was soon dismissed by Shreyas Gopal.

However, then Pant took the host over the line in the 17th over with a six. Meanwhile, Delhi lost Colin Ingram in the 14th over.  With the win, DC has now reached the top-2 rankings in the IPL 2019 points table. 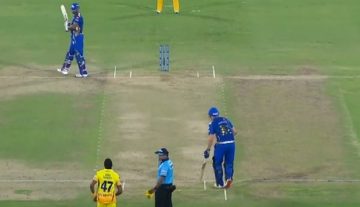