Rajasthan Royals (RR) and Sunrisers Hyderabad (SRH) were locking horns with each other at the Rajiv Gandhi International Stadium in Hyderabad. After winning the toss, the RR skipper, Ajinkya Rahane decide to bat first and he opened the inning along with Jos Buttler. However, the hosts had won the game 5 wicket as they chased down the target of 199 with 6 balls to spare.

During the toss, SRH skipper, Kane Williamson, revealed that they have made one change as Shakib Al Hasan made way for him, but Rajasthan made no changes in their squad.

Buttler and Rahane started very slow as a result of that the former dismissed quite early in the innings by Rashid Khan. Then came Sanju Samson who smashed the first century of IPL 2019. He stitched as many as 119 runs for 2nd wicket with Rahane (70) and 64 runs for the third wicket with Ben Stokes (16).

Samson started his carnage in the 18th over when he smacked 24 runs off Bhuvaneshwar Kumar with the help of six and 4 fours. With the help of that, Rajasthan managed to reach a defendable total of 198/2 as Samson amassed 102* off just 55 balls. However, it wasn’t sufficient for hem to win the game.

During the chase, David Warner (69) and Jonny Bairstow (45) and gave the hosts the much-needed start by smashing 69 runs off the powerplay itself. Both of them added as many as 110 runs for the opening wicket insider 10 over which almost ended the game for the visitors. However, both of them were, later on, got dismissed as Stokes got the wicket of Warner in the 10th over, while Bairstow was dismissed by Shreyas Gopal in the next over, but a lot of credit for that wicket should go to the brilliant catch of Dhawal Kulkarni.

After their dismissals, Vijay Shankar (35) and Kane Williamson (15) added 47 runs for the third wicket before getting dismissed in 15th and 16th over and SRh faced a little bit of hiccup but Rashid Khan (15*) and Yusuf Pathan (15*) took the hosts over the line with 6 balls to spare. 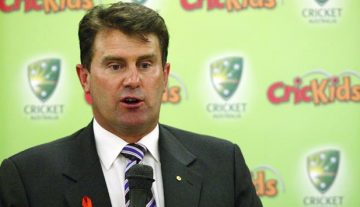 News
By Sandy - Mar 16, 2018
Both sides should be on their final warnings, Mark Taylor on South Africa-Australia heat moments