The Chennai Super Kings (CSK) opener, Faf du Plessis has been an integral part of the franchise and recently, he stated that CSK knows how to win big moments and their performance in the second qualifier was one of the best possible testimony for the same. The victory meant that we will be witnessing yet another IPL final between Mumbai Indians (MI) and CSK.

While Du Plessis has had a decent outing in this season so far, his opening partner Shane Watson was not at his best and failed to put up a significant score. The duo eventually helped the franchise in the qualifier when they amassed 81 runs against the Delhi Capitals (DC) which helped CSK to chase down the target of 148 in the 19th over. It will be CSK’s 8th final in 10 years.

Talking about the partnership, Du Plessis revealed that he had a discussion with Watson before the game as he wasn’t going through the best of form. As Chennai has the experience of winning several big games, it worked in their favor which eventually meant that they qualified for yet another final. Their record in this tournament has been quite dominating.

Faf further elaborated, “We spoke about it before the game – didn’t have the best run in the last 5-6 games. We have a lot of confidence as a team to win a lot of big games – so we draw confidence from that. We also know the strength of ours is getting those partnerships – even if we go 3-4 overs without runs, we have a great lower and middle order to bring us back. Watto (Watson) thanked me already for scoring quickly at the beginning before he got set. Hopefully, we can both get them off the meat in the final right from the word go.”

On the other hand, Watson also accepted being a bit nervous at the beginning of his innings especially due to the indifferent run which Watson was experiencing all through the tournament.

Describing the same, Watson said, “Very grateful for the faith CSK have shown in not just me, but all the players are grateful. Faf batted beautifully. Thanks to Faf for helping me through that stage. We have played well from the top with MS (Dhoni) and Fleming. When you have experienced players, you have an understanding of what to do. We are making the most of the experience we have had and we are going to make the most out of it on Sunday.”

There was a mix up in the running between the wickets between Faf and Du Plessis in eth first over itself. As Du Plessis tapped towards the point region, both the batters ran in both directions at a certain point. Eventually, they ended up running a single.

Talking about the same, Faf said, “I reckon we almost ran three there. It was terrible running, and that’s not the kind of start you want in a run-chase of a knockout. Thankfully we recovered from that and did pretty well.” 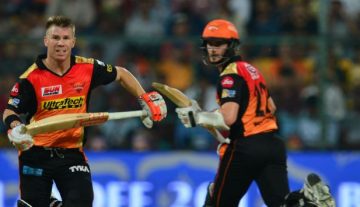