In the 33rd match of the Indian Premier League (IPL) 2020, Rajasthan Royals (RR) and Royal Challengers Bangalore (RCB) will be locking horns with each other at the Dubai International Stadium in Dubai in the afternoon game on the double-header Saturday (October 17). This will be the 23rd encounter between the two teams, with Rajasthan Royals holding a 10-9 head-to-head advantage from their previously clashes between them.

However, in IPL 2020, RCB has had a good run in a season so far as they have win five out of the with games they have played so far. Going into the match, RCB will be looking to bounce back quickly with a win after losing their last match against KXIP. With the likes of Chris Morris and Washington Sundar going well in the bowling department, skipper, Virat Kohli along with other batsmen have also been doing well.

On the other hand, the Royals will be looking to get back on the winning ways as in the season so far they have won just three games out of the opening eight games in the tournament. Steve Smith and his men have been on a patchy run of form and will be aiming to get back to winning ways.

With none of the players having much of a practice, Jos Buttler seems to be a better pick as he has been known for making a strong comeback and he will be much more effective on slow pitches this season. However, for RCB, AB de Villiers will be keeping the wickets as he is known for playing match-winning knocks, but in order to maintain the balance of the IPL Fantasy XI, De Villiers will tend to give more points.

Steve Smith, Riyan Parag, Aaron Finch, Virat Kohli, and Devdutt Padikkal have always been the prime contenders for the fantasy cricket. Even, Robin Uthappa can also be added in fantasy cricket and that will depend on the balance of the squad. Apart from them, there are some useful batsmen in the line-ups as well, like Gurkeerat Mann, and David Miller (if he plays).

There are some really reliable all-rounders in both the teams but citing the slow pitch in Dubai, Glenn Maxwell, Chris Morris, and Washinton Sundar seems to be the perfect fit. Apart from them, the good all-rounders for IPL fantasy cricket are Moeen Ali and Shivam Dube.

Both the teams don’t have decent bowling line-ups but they have managed to do a decent job. Bowlers like Isuru Udana, Navdeep Saini, Yuzvendra Chahal, Jofra Archer, and Kartik Tyagi become the obvious choices for the IPL Fantasy XI on the sticky track of Dubai. Apart from them, some crucial bowlers can be like, Mohammed Shami, and Mohammad Siraj 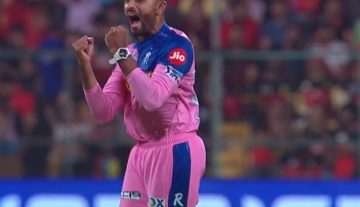