Rajasthan Royals (RR) will be locking horns with Kings XI Punjab (KXIP) in the 9th match of the Indian Premier League (IPL) 2020. RR are one of two teams who are currently unbeaten although they have just played one match so far. In their only IPL 2020 fixture, RR overcame CSK courtesy of Sanju Samson’s flashy knock. Despite missing the services of Jos Buttler, Steve Smith and his men were able to get the job done although they would welcome Buttler’s return with open arms.

Rajasthan Royals (RR)While RR has prior experience of playing in Sharjah, they will be facing a stern challenge against a well-oiled KXIP side, whose lone loss came in a Super Over thriller against DC. Captain KL Rahul would be high on confidence as he scored the first century in IPL 2020 against RCB.

However, Kings XI Punjab is slightly behind the Rajasthan Royals in their head-to-head match-up, meaning that they would love to even things up with a win in this fixture. As the two sides prepare for a thrilling encounter, here’s a look at three key player battles to keep an eye on.

In the absence of Ben Stokes, RR skipper Steve Smith will be playing a crucial role. He has consistently done well in IPL in recent times as he had amassed 472 runs with three fifties in 2017 and 319 runs, in 2019 against with the help of three fifties. This season he will have to be at his very best for the RR to do better.

Smith’s battle with the Indian fast bowler Mohammed Shami could be an interesting one as the latter has been known for troubling one of the best of batsmen. Shami would be confident after his three-wicket show against Delhi Capitals, followed by a brilliant spell against RCB. Smith has been troubled by England fast bowler Jofra Archer in the recent past. That should be on Shami’s mind when he will be bowling to Smith.

With every match-winning innings that KL Rahul plays, he manages to witness an increase in is fanbase. He played a mature hand in KXIP’s win over RCB, finding his groove en route to his 69-ball 132. Rayudu has settled in nicely as one of the key figures in Punjab’s batting line-up that features some veterans like Mayank Agarwal and Karun Nair. He will most likely face a stern challenge from the RR leg-spinner, Shreyas Gopal.

The leg-spinner had a wonderful 2019 season when he scalped as many as 20 wickets at a strike-rate of 14.40, which featured a hat-trick against RCB as well. With his bag of tricks, Gopal has often been seen troubling some stalwarts like Virat Kohli and AB de Villiers. Most definitely, he would be looking forward to taking on the likes of Rahul.

An attacking batsman against a fiery fast bowler makes for an intriguing contest. And KXIP all-rounder, Glenn Maxwell is among the most aggressive batsmen on the T20 circuit. He failed to do much in the last season of IPL, but in international cricket in 2019, he scored runs at a strike-rate of 183.33. Even if he spends only a couple of overs at the crease, he can make the most of it.

But, the contest is like a double-edged sword. While fast bowlers have also been seen leaking runs in IPL 2020, they also have the capability of making batsmen look embarrassingly bad if they get their line and length right. Jofra Archer is nothing short of one of the most fearsome fast bowlers in IPL he has scalped 27 wickets in 22 matches at a strike rate of 19.07. He has performed against the best in the business and has made his mark with his guile. 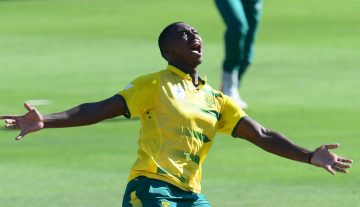 IPL 2018
By SMCS - Apr 13, 2018
Lungi Ngidi Faces Embarassment At Indian Airport On His Way Back For Father’s Funeral