In the last game in Sharjah between Rajasthan Royals (RR) and Chennai Super Kings (CSK) as many as 33 sixes and 18 boundaries were smashed which is the joint-highest for an IPL game. The small ground now clearly indicates that the next clash of RR against Kings XI Punjab (KXIP) will be a high-scoring one.

Both teams have ad witnessed morale-boosting wins with RR defeated CSK on the same ground, while KL Rahul’s record-breaking unbeaten 132 helped his team to register a 97-run win. Albeit most teams opting to chase citing the dew that comes into play later in the day, the teams batting first have been able to restrict oppositions with six of the eight games being won batting first.

Conditions in Sharjah are expected to be a bit intense as the ball was being soggy in the second innings and the fast bowlers were finding it difficult to control the variations. Having played here before and familiar now with the conditions, Rajasthan may have a one-up over KXIP.

However, Punjab also has Ravi Bishnoi and Murugan Ashwin, who took three wickets apiece against RCB; and with Sheldon Cottrell and Mohammed Shami in good rhythm, they look like an attack to reckon with. Rajasthan will be boosted by the return of Jos Buttler as their skipper, Steve Smith stressed on the gloveman’s stupendous record at the top.

RR will have some thinking to do as they lack firepower in the lower-middle order with Ben Stokes’s absence. If Rajasthan are to stop a raging Rahul, they will need Archer to make early inroads. . Rahul dominates that battle, having scored 58 runs off 34 balls against Archer, with the pacer is yet to scalp the opener.

After the last game, KL Rahul was asked about the absence of big-hitting Chris Gayle as he can be expected to make a comeback. With Nicholas Pooran failing to prove his worth in the opening two games, Gayle can be expected to come back. James Neesham was brought in for Chris Jordan but didn’t bat got to bat as Karun Nair played at no.5. If Gayle returns, it could also be the ideal counter against the legspinners, who he has a promising record against.

Jos Buttler will clearly be walking back into the playing XI, which should mean David Miller will lose out on his spot after a diamond duck on his RR debut. After Sanju Samson’s smashing knock against CSK, his role in the line-up will be revisited given RR’s apparent lack of a power-hitter in the lower-order, factoring in Robin Uthappa’s lean patch. 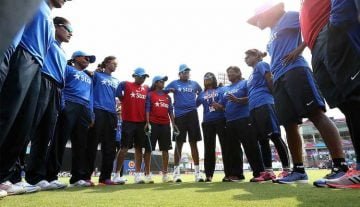