In the second Qualifier of the Indian Premier League (IPL) 2020 the Delhi Capitals (DC) will be facing the Sunrisers Hyderabad (SRH) at the Sheikh Zayed Stadium on Sunday. In the last couple of weeks, SRH has been absolutely sensational as they have pulled off four consecutive wins. They beat both MI and DC, who are the only other remaining teams in IPL 2020, during this winning streak.

Despite losing the likes of Bhuvneshwar Kumar and Mitchell Marsh to injury, SRH’s bowling attack hasn’t disappointed with T Natarajan and Rashid Khan picking up 35 wickets between them. The duo of Kane Williamson and Jason Holder held their nerve against RCB with an epic partnership in the eliminator. On the other hand, DC isn’t in the best of form. They have won only one of their last six games.

Kagiso Rabada also has had some woeful outings in recent games, which has been detrimental to their fortunes. They will need the duo of Shikhar Dhawan and Shreyas Iyer to come up to get their forms back against a well-rounded SRH bowling attack. DC was at the receiving end of thumping losses in both their IPL 2020 fixtures against SRH. Rashid Khan spun a web around their batting unit, which has blown hot and cold in this IPL.

With a place in the final hanging in the balance, we should be in for another cracking play-off game in this IPL!

Rishabh Pant seems to be a better pick as he has been known for making a strong comeback and he will be much more effective on slow pitches this season. However, for SRH, Srivats Goswami will be keeping the wickets as he is known for playing match-winning knocks, but in order to maintain the balance of the IPL Fantasy XI, Bairstow will tend to give more points.

Shikhar Dhawan, Shreyas Iyer, Manish Pandey, and David Warner have always been the prime contenders for fantasy cricket. Even, Ajinkya Rahane can also be added in fantasy cricket and that will depend on the balance of the squad. Apart from them, there are some useful batsmen in the line-ups as well, like Priyam Garg, and Prithvi Shaw (if he plays).

There are some really reliable all-rounders in both the teams but citing the slow pitch in Abu Dhabi. Jason Holder, Axar Patel, and Marcus Stoinis seem to be the perfect fit. Apart from them, the good all-rounder for IPL fantasy cricket is Abdul Samad.

Both the teams don’t have decent bowling line-ups but they have managed to do a decent job. Bowlers like Kagiso Rabada, Anrich Nortje, R Ashwin, Rashid Khan, and R Natarajan become the obvious choices for the IPL Fantasy XI on the sticky track of Abu Dhabi. Apart from them, some crucial bowlers can be like, Daniel Sams and Sandeep Sharma 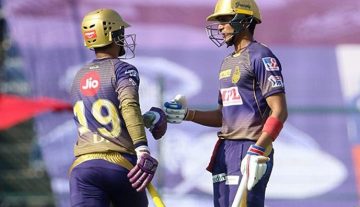