The Indian Premier League (IPL) franchise, Sunrisers Hyderabad (SRH) fast bowler, T Natarajan has tested positive for COVID-19 in Dubai after a scheduled RT-PCR test. The player has isolated himself from the rest of the squad, however, he has not shown any symptoms of the virus so far.

The medical team has identified six people from the SRH contingent who came in contact with T Natarajan and they all are isolated from the other member of the squad. The members who came in contact are, Vijay Shankar, Team Manager – Vijay Kumar, Physiotherapist – Shyam Sundar J, Doctor – Anjana Vannan, Logistics Manager – Tushar Khedkar, and Net Bowler – Periyasamy Ganesan.

In a press release regarding the same, the Board of Control for Cricket in India (BCCI) said, “The medical team has identified the below mentioned six close contacts of the player, who have also been placed in isolation.”

BCCI in their statement added, “The rest of the contingent including the close contacts underwent RT-PCR tests at 5AM local time this morning and the test reports are negative. As a result, tonight’s game between Sunrisers Hyderabad and Delhi Capitals will go ahead at the Dubai International Stadium, Dubai.”

The rest of the contingent including the close contacts underwent RT-PCR tests early in the morning on Wednesday and the test reports are negative. As a result, the game scheduled to be played between Sunrisers Hyderabad (SRH) and Delhi Capitals (DC) will be expected to go ahead at the Dubai International Stadium.

Earlier this year in May, the BCCI had to halt the IPL 2021 mid-way because of a spate of Covid cases in the tournament India in the backdrop of the deadly second wave of virus that had wreaked havoc in India. 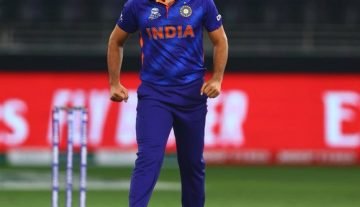