Former Indian skipper MS Dhoni gave his fans a reason to smile when it was announced by the Board of Control for Cricket in India (BCCI) that he will be the mentor of Team India for the upcoming T20 World Cup 2021 in the UAE and Oman.

This decision brought a sense of optimism among the Indian cricket fans and the experts as well. It will be the first time since Dhoni’s retirement that he will be seen directly involved with the Indian team. He played his last international game during the World Cup 2019 before retiring in August 2020.

Amidst, Dhoni has come forward and urged people to take the vaccination against Covid-19. He is spreading awareness among the citizen to wear the mask in public and be protected against the virus.

Dhoni was roped in as the brand ambassador for Kauvery Hospitals recently. “Our safety is in our hands…kandiappa vaccine podu…mask podu…” said the former India cricket team skipper.

The 40-year-old is currently in Dubai with Chennai Super Kings (CSK) and gearing up for the upcoming second leg of the Indian Premier League 2021. Dhoni-led CSK had a rare poor season during the IPL 2020, which took place in the UAE, as they finished second from the bottom.

However, things changed this time around. CSK got off to a flying start in the first leg of the IPL 2021. They won five out of the seven matches they played in the first leg before the season came to a halt owing to the Covid-19 pandemic.

Dhoni will be eyeing to take CSK to another title-winning campaign this time around. 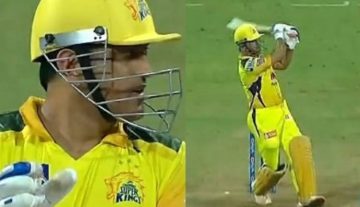