Punjab Kings and Rajasthan Royals are locking horns in the 32nd match of the Indian Premier League 2021 in Dubai. Both teams have an indifferent season so far in the league but are currently eyeing to revive their campaign in the remaining matches in the UAE.

KL Rahul won the toss and opted to bowl first in Dubai against the Sanju Samson-led side. Both teams named a few changes in their playing XI due to several unavailable players. Adil Rashid and Aiden Markram are making their IPL debut for PKBS while Evin Lewis is drafted in the XI straightaway.

Yashasvi Jaiswal and Lewis opened the innings for RR and provided them with a blistering start before the latter got out for 36 in 21 balls. He scored seven boundaries and one huge six during his innings.

Sanju Samson got out soon after scoring four runs. Meanwhile, Yashasvi Jaiswal was going strong from the other end and found a good ally in Liam Livingstone, who has been in the form of his life for the last few months.

Livingstone started to tear off the PKBS bowling lineup with his hard-hitting ability. He was looking set to take Rajasthan Royals to a mammoth total until Fabian Allen took a sensational catch to cut short Livingston innings.

Livingstone had hit a mighty six off Arshdeep Singh that soared to the second tier and sent shivers in the PKBS camp. He was looking to hit another might six and the ball looked like going for a maximum until Fabian Allen dived to take a stunning catch.

Livingstone got out for 25 in 17 balls, where he hit two fours and one huge six. Yashasvi Jaiswal also got out very soon for 49 and missed his fifty by one run. 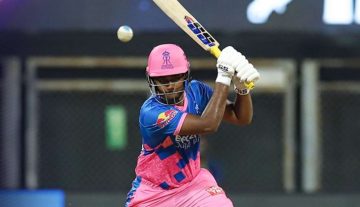