In the much-awaited final of the Indian Premier League (IPL) 2022 Gujarat Titans (GT) will be locking horns with Rajasthan Royals (RR) at the Narendra Modi Stadium in Ahmedabad on May 29 (Sunday). RR registered a win over spirited Royal Challengers Bangalore (RCB) by seven wickets in Qualifier 2 of the IPL 2022 to reach the final.

Moreover, RR has managed to reach the IPL final for the first time since winning the inaugural edition in 2008 and is one step away from reclaiming its lost glory. The Royals will be up against an in-form Gujarat who handed them a thumping seven-wicket loss in the Qualifier 1 earlier this week with David Miller smashing pacer Prasidh Krishna for three sixes in the final over.

As the Rajasthan Royals look to rewrite history by coming up on top in the summit clash, they would be expected to stick with the same combination that had performed outstandingly well against RCB in Qualifier 2. In the season so far, GT and RR locked horns with each other twice and on both the occasions, Gujarat has managed to get better off Rajasthan, once in league stages and the other time in Qualifier 1

In Qualifier 1, Jos Buttler scored 89 off 56, and despite starting slow he smashed big in slog overs, and this time GT will hope to keep Buttler quiet, which could see Rashid Khan bowl in the powerplay. That said, GT will pin their hopes on their new-ball pair to get Buttler, who has fallen to pace 6 times in the last 7 games. Rashid has dismissed Buttler and Shimron Hetmyer 4 times each while Samson has often chosen to play out the spinner and even though he averages 68, he strikes them at below 100.

RR will have to be wary of GT’s finishing prowess, which they witnessed in the game last week. Rahul Tewatia in the IPL averages 67 against left-arm pace and has struck at 188.70, scoring 134 in 71 deliveries, and RR has two in Trent Boult and Obed McCoy. Miller took GT over the line in Qualifier 1, but RR will fancy their chance against him with him having fallen thrice to both Ashwin and Chahal. RR’s pace attack, though, has leaked runs at the death and this is a weakness that could be exploited by GT’s big hitters. 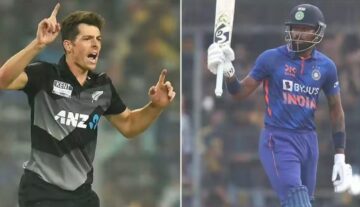