Virat Kohli will be expecting a  hoping for a fairytale conclusion to his captaincy tenure of India’s T20 side as he chases an elusive first major title at the World Cup. Kohli, 32, will step down as the captain of the Indian T20 team after the conclusion of the 16-nation competition in the United Arab Emirates and Oman on Sunday.

The prodigious run-getter has also decided to resign as the captain of Royal Challengers Bangalore (RCB) in the Indian Premier League (IPL), and many have applauded his choice to focus more on his batting. As their wait for victory grew in recent months, Kohli became the subject of increasing conjecture.

Former India all-rounder Irfan Pathan reckons Kohli will be able to go into the World Cup, which begins on October 24, with minimal pressure, and that can prove to be immensely beneficial for the squad.

During a recent chat with AFP, Irfan Pathan said, “I think he will enjoy his cricket more now after taking this decision. India will do well with the side, the confidence, and the experience they have.”

Kohli became the successor of MS Dhoni as India’s captain over as captain in all forms after MS Dhoni stepped down as limited-overs captain in 2017. Since then, India has failed to win a World Cup or a Champions Trophy. Kohli will still have Dhoni by his side as the team mentor for the competition. Dhoni-led India to the T20 title in 2007 and the 50-over crown in 2011. The victory sparked a T20 craze across South Asia, resulting in the establishment of the IPL in 2008.

Talking about the same, Irfan Pathan said, “I always want India to win, but the West Indies will be one of the favorites. England and Australia all have good attacks, and you can never count out Pakistan. It will be a very, very competitive World Cup.”

ALSO READ: Sanjay Manjrekar says he would never have R Ashwin in his team

All 15 members of the Indian squad, along with the three standby players, have been in the UAE for over a month, working with their respective IPL franchises to become used to the surfaces in Dubai, Abu Dhabi, and Sharjah. 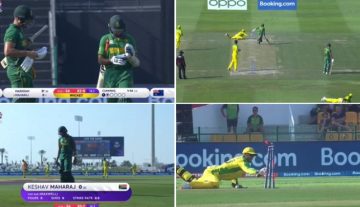 Videos
By CricShots - Oct 23, 2021
Keshav Maharaj Got Out After A Terrible MIx-up With Aiden Markram