West Indies skipper, Nicholas Pooran made a huge mistake by giving the ball to the all-rounder, Odean Smith, who got belted for runs in the powerplay and it forced Jason Holder to take over, and then he started talking to the team. West Indies were heading out of the T20 World Cup as things stood, with Ireland needing just 32 runs off 44 balls script a famous victory at the Bellerive Oval in Hobart.

West Indies’ batting-order shuffle to promote Odean Smith over veteran Jason Holder paid little dividends as the former managed to score just 19 off 12 deliveries. Thus, chasing a below par score of 147, the Irish have been in control throughout the second innings, instigated by the best powerplay score for a team in the ongoing tournament thus far. Young skipper Nicholas Pooran faiked to take apt decisions and it led to  him making falty bowling choices that helped the Europeans to break the shackles without breaking much sweat.

Ireland was once cruising at a brisk pace of 31/0 after three overs when the wicket-keeper unexpectedly decided to hand over the ball to Odean Smith, once again favoring him over Holder despite his incredible performances in the two games so far. Smith, with a T20I economy rate of 9.79 and tendency of leaking runs in the powerplays, was banished immediately by the on-song Andy Balbirine.

The 30-year-old was seen having a lengthy discussion with Smith while setting the field alongside him and instructing him about the bowling plans even as the skipper remained uninvolved. The incident was yet another terrible-looking debacle for the Caribbean outfit. The internet was quick to pile on the back of Pooran for his ignorance of Holder’s abilities throughout the course of the game, blaming him for the team’s dismal performance.

Here is the how the netizens reacted to the incidents:

The only thing more baffling than Pooran still playing international cricket is Jason Holder playing all formats and not being the captain… he's literally the best they have.

West Indies know they have Jason Holder in the side don't they? #T20WorldCup #IREvWI

Odean Smith has conceded over 11 RPO in the powerplay overs in T20I cricket and was given the 4th over.

Jason Holder who has been the Windies’ most dangerous bowler in the past year taking 28 wickets in 19 matches @ 19 was not given an over.#WIvIRE

I'm my opinion Jason Holder should still be captain. Nicolas Pooran has looked a bit clueless to me#T20WorldCup

In the first 25 overs of the match, #JasonHolder has neither batted nor bowled so far.

Explain that when you have 146 on the board.#WestIndies #Ireland #CricketTwitter 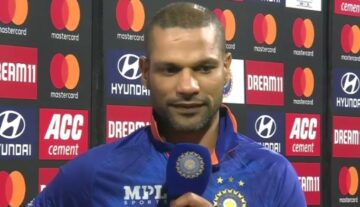 News
By CricShots - Nov 24, 2022
Shikhar Dhawan Asserts He Has No Fear Of Losing Captaincy