On Friday, the Australian cricket team was bundled out for a meager total of 151 in their first innings on day three of the third Test against India at the Melbourne Cricket Ground (MCG) with the help of Jasprit Bumrah’s six for 33 orchestrating the hosts’ downfall.

In his Test debut year, the young fast bowler now has registered five-wicket hauls in South Africa, England and now, in Australia to become the first Asian bowler to take a five-for in each of the aforementioned countries in a calendar year. He also eclipsed a 39-year-old record to become the highest wicket-taker by an Indian on debut in a calendar year with 45 wickets and counting.

Jasprit Bumrah in his Test debut year has five-wicket hauls in South Africa, in England and now in Australia!#AusvInd#AusvsInd

Bumrah, who has been in phenomenal form this year across all formats, surpassed Doshi’s record, after taking three wickets on day three. He used the short ball to good effect and dismissed opener Marcus Harris for 22. He then returned to see the back of Shaun Marsh on the last ball before lunch with a beautiful slower yorker.

Travis Head was clean bowled with a 142kmph ripper, which swung back in late leaving Head beaten for pace. Australia captain Tim Paine and Pat Cummins were showing some grit, but Bumrah returned to break the 36-run partnership after he drew Paine with a good length delivering angling in towards off only for the batsman to edge it behind to Rishabh Pant.

Bumrah bamboozled Nathan Lyon with a mixture of pace and bounce. He followed his bouncer with a full rocket that trapped Nathan Lyon, who departed for a duck and in a similar way, he wrapped up Australia’s innings with the wicket of Josh Hazlewood, who was cleaned up for a duck to complete a fine bowling performance.

Here are some of the praise Bumrah received on Twitter:

2018 welcomed @Jaspritbumrah93 to test match cricket and if first impressions do count for anything we are seeing something pretty special. 45 wickets at just 21, with an innings to go! #AUSvIND 👊🏽👏🏽🇮🇳

What an outstanding bowling effort from India and a really special effort from Jasprit Bumrah. He has been the best bowler on display across both sides by some distance and has put India in a really dominating position #AusvInd pic.twitter.com/sP3A05b4Ti

India's bowling average in this series is 23.94, their lowest ever for a tour of Australia. #AUSvIND

Jasprit Bumrah was fast-tracked in Test cricket this year. Proved to be a masterstroke. Has 45 wickets in 9 Tests with five-fers in South Africa, England and now Australia.
Currently one of the most intelligent fast bowlers in world cricket across all formats#AUSvIND

India have found a treasure in Jasprit Bumrah. So young and already so accomplished.

Might b debatable but for me the best bowler across all formats and conditions…. Jasprit Bumrah…. You beauty 🙌🙌#AUSvIND 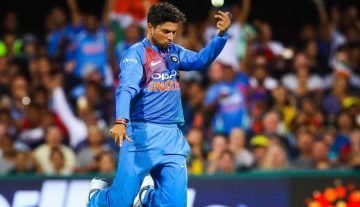