The premier Indian seamer, Jasprit Bumrah has proved time and again that he is one of the best bowlers of modern-day cricket. He is known for his ability to bowl pin-point deliveries which often leave batters clueless. During the second day of the third and final Test match against Proteas at Cape Town, Bumrah took three wickets. Earlier, on Day 1, he sent back South African Test skipper Dean Elgar cheaply in his third over.

On the second day, Jasprit Bumrah bowled an unplayable delivery to Aiden Markram in the first over and the latter decided to leave the ball in the first place, but the ball went on to shatter his stumps. Later in the first session of the day, Umesh gave India a significant breakthrough by cleaning up the dangerous-looking Keshav Maharaj. South African ended the first session at 100/3.

The Indian bowlers came out all guns blazing in the second session and in a rare occurrence, the South African team received five penalty runs as Cheteshwar Pujara dropped a catch of Temba Bavuma and the ball rolled down to the Helmet of Rishabh Pant.

The drop catch did not hurt India much though as Temba Bavuma eventually fell after a couple of overs later to Mohammed Shami, caught by Kohli at second slip. Just after a couple of deliveries, Mohammed Shami also took the wicket of the South African wicket-keeper, Kyle Verreynne as the ball took the outside edge and Rishabh Pant took a comfortable catch.

Jasprit Bumrah ended the second session by cartwheeling the off-stumps of his nemesis Marco Jansen in the last over before the teas break to leave the Proteas reeling at 175/7. Jasprit Bumrah ripped through the defense of Marco Janse and sent back the latter’s off-stump for a walk. Marco Jansen made his way back to the dressing room after scoring just seven runs.

i keep saying this again and again but Bumrah, ONLY BUMRAH. pic.twitter.com/5txF8jm0ba

144 kmph and clattering into the off stump. That's the bumrah I love.

That's Bumrah for you! 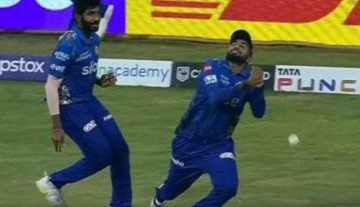 IPL 2022
By CricShots - May 17, 2022
MI Fans Disheartened As Jasprit Bumrah And Sanjay Yadav Drop A Catch