Currently, the Indian women’s team is locking horns with their Australian counterpart in the second ODI of the three-match series at the Harrup Park, Mackay. The visitors lost the first game by a huge 9-wicket margin, however, they made a strong comeback by registering the above par score of 274/7 after being asked to bat first by the Aussies skipper, Meg Lanning. In the first over of the chase, the host lost the wicket of Alyssa Healy, owing to brilliant inswinging delivery by the veteran Indian bowler, Jhulan Goswami.

Jhulan Goswami drew the first blood for India on her third ball itself by dismissing Alyssa Healy (0 off 3) and Meg Lanning joins Beth Mooney at the crease. Here is the video of the dismissal:

Earlier in the first innings, Indian opener Smriti Mandhana smashed her 19th half-century with the help of 11 boundaries after the visitors were asked to bat first. She shared two crucial partnerships — 76 runs with Richa Ghosh (44) and 74 runs with her opening partner, Shafali Verma (22) — to help India reach a respectable total.

It is the highest total scored against Australia since their 25-match winning streak started in 2018. The Indian openers came out all guns blazing off to a flying start with Mandhana and Shafali (22) racing to 68/0 in the first 10 overs, their best in the 10 ODIs they have played this year.

But the threatening opening stand was broken in teh 12th over by spinner Sophie Molineux in the 12th over as she dismissed the latter. A mix-up then led to skipper Mithali Raj’s (8) run out followed by Yastika Bhatia’s (3) early dismissal as the hosts made a strong comeback.

Smiriti Mandhana and Ghosh then steadied the ship, but the opener sliced it straight to point which marked the end of her innings. Pooja Vastrakar (29) and Jhulan Goswami (28 not out) made a partnership of 53 runs to help India breach the 250-run mark. Tahlia McGrath (3/45) was the pick of the bowlers for Australia with Molineux (2/28) picking two wickets. 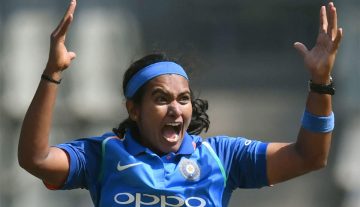