The Australian fast bowler, Jhye Richardson, who made his debut in the ongoing Ashes Test in Adelaide smacked Chris Woakes for a huge six towards cow corner on the second ball he faced in Test cricket in the ongoing second Ashes Test at the Adelaide Oval on Friday. He was eventually dismissed caught behind the very next ball, and Australia declared their first innings at 473/9.

Jhye Richardson walked in after the dismissal of fellow debutant Michael Neser and went for big hits right away as Australia looked for quick runs. He failed to connect the ball well on the first one over long-on and ran three runs, but managed to middle the next to send it deep into the stands.

That was after Neser (35 off 24) and Mitchell Starc (39* off 39) added quickfire 58 for the eighth wicket. Earlier, Marnus Labuschagne got to his maiden Ashes hundred, survived a lucky escape with a no-ball dismissal against Ollie Robinson, before being dismissed off the same bowler soon after.

Skipper Steve Smith missed his 28th Test ton by seven runs, falling leg-before to James Anderson for 93. Alex Carey, playing his second Test, got to his maiden Test fifty before the lower-order blitz. Ben Stokes was England’s pick of the bowlers with 3/113, while Anderson finished 2/58. 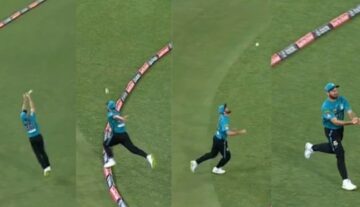 Social Shots
By CricShots - Jan 2, 2023
MCC Gives An Explanation For The Controversial Catch Of Michael Neser