The Indian skipper, Virat Kohli helping his English counterpart, Joe Root to deal with cramps became one of the moments of Day 1. However, the latter also scored a memorable is memorable hundred, and he feels that they will be chasing the first-innings total in the range of 600-700 on Day two. Opting to bat, the visitors ended the first day at a promising 263 for three with Root scoring a fine century in his 100th Test.

Speaking to media in a virtual interaction after day’s play, Joe Root said, “We have got to look and try and get as many as we can 600-700 if we can, really trying to make most of the first innings make it good and those four overs trying to work quickly. So if we can bat into whole of tomorrow or maybe day three then things could speed up quite quickly for us and you never know what can happen for that point onwards.”

Batting on 128, Root stressed on the importance of carrying on.

The English skipper explained, “Playing the 100th Test was special and I mean coming in with some good form and I need to make sure I cash in on…And I keep getting myself in positions to make big hundreds and I have got to keep taking them, and we’re going to win more games if I’m doing that and so hopefully, I can kick on tomorrow personally but most importantly we can have a bat tomorrow and we can be in a strong position in this game.”

The England captain was all praise for opener Dominic Sibley, who made a dogged 87. However, Joe Root was surprised by his teammates on Thursday night ahead of his 100th Test.

Describing the same, Root said, “Yeah…it was very special, last night the guys (got a) surprise for me and said videos from past players, friends, and family and Ben (Stokes) in particular stood up and said really kind words, and then to come today and for us start a series in the way we have it, it could not have gone any better…we got a little blip in end (Sibley getting out), so really hope that we can build on that tomorrow and delighted to have things go our way.” 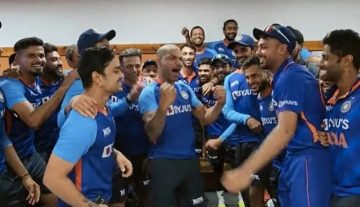 Videos
By CricShots - Jul 28, 2022
Indian Players Chanted “We Are Champions” In The Dressing Room Afte The Series Win