News
Jofra Archer Misses Out Of The First Two Tests From The England Squad Against India
By CricShots - Jul 21, 2021 7:27 pm
Views 31

The young England fast bowler, Ollie Robinson was recalled to the England squad on Wednesday for next month’s first couple of Tests of the 5-match Test series against India. Jofra Archer continues to miss out as he is not fully fit. Meanwhile, Chris Woakes has also been excluded from the squad owing to a heel injury. Opener Haseeb Hameed, who is playing for County Select XI against India in Durham currently, is back in the squad.

Notably, Ollie Robinson performed well on his England debut, taking seven wickets — including a haul of 4-75 — and making a useful 42 in a drawn series opener at Lord’s. But the Twitter storm against the racist tweets he made a few years back meant he was suspended from international duty and missed an eight-wicket defeat in the second and final Test against New Zealand at Edgbaston.

But Robinson has now been included back in the squad for the opening two matches of a five-Test campaign against India at Trent Bridge (starting on August 4) and Lord’s (August 12).

Talking about the squad in a statement released by England and Wales Cricket Board, coach Chris Silverwood said, “We have selected Ollie Robinson after his seven-wicket Test debut against New Zealand. Ollie proved in that Test that he has the ability to replicate his outstanding form in the County Championship at the international level and we will continue to work with him to develop his England career.” 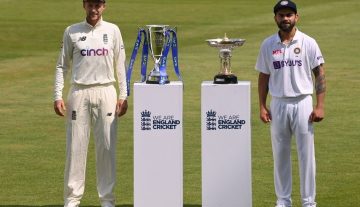