Gujarat Titans (GT) is locking horns with Rajasthan Royals (RR) in Qualifier 1 of the playoffs of the ongoing Indian Premier League (IPL) 2022 at the iconic Eden Garden in Kolkata. Everyone knows Jose Butler the batter, but in this match, Jos’ involvement was seen everywhere as he caught one of the brilliant catches in the match, even bowler Obed McCoy couldn’t believe it.

After winning the toss, GT skipper, Hardik Pandya opted to field and they made one change as Lockie Ferguson made way for Alzarri Joseph, but RR made no change. The Rajasthan Royals were jolted early as they lost Yashasvi Jaiswal in the second over itself and he had been batting well in the last few games. But, Sanju Samson and Jos Buttler made sure they did not lose more wickets as Samson smashed the GT bowlers all around the ground but was dismissed on 47 by R Sai Kishore.

WATCH – Hardik Pandya Slips At Long-on While Attempting A Catch

Jos Buttler was struggling for runs as he could not get going like he is used to but made sure he did not throw his wicket away. He played a fiery knock of 89 off 56 balls and helped his team to reach the total of 188/6 in their quota of 20 overs.

During the chase, GT suffered the earlier blow as they lost Wriddhiman Saha in the first over but Matthew Wade and Shubman Gill scored 64 runs in the first six overs themselves. However, Gill got run-out in the 8th over after a mix-up with Wade. However, Wade also got out in the 10th over.

On the third ball of the over, Wade smashed the ball hard thinking of a six, but this time it was different. Jos Buttler was standing at boundary and he judged the ball well to time his jump and grabbed it with both hands. When Buttler caught the ball, he didn’t pay attention to Obed McCoy, who thought the ball is hit for a six and he couldn’t believe that he had got the wicket. 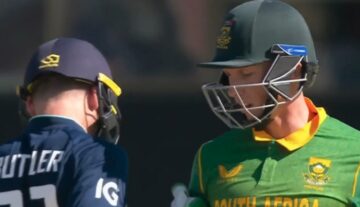