Since the inaugural edition of the Indian Premier League (IPL), many global, as well as Indian stars, have taken the tournament by storm. However, it’s difficult to pick the best-performing players of the IPL since the tournament’s inception as there are so many. Meanwhile, at a time when the sporting scenario is at a standstill, South African all-rounder, JP Duminy dished out an all-time IPL XI for his fans in ‘The Super Over Podcast’.

To start off his XI, Duminy went with the left-handed opening duo of Chris Gayle and Adam Gilchrist. Along with being a dependable opener, Gilchrist is also one of the most skilled wicket-keepers while Gayle is one of the most lethal batsmen across the globe.

Following both the world-class openers, Duminy slotted the Indian duo of Rohit Sharma and Virat Kohli at the No.3 and No.4 slots respectively. Both Virat and Rohit are currently at the peak of their careers and they’re expected to play a crucial role for India in the upcoming T20 World Cup.

Rohit and Kohli have single-handedly won a lot of games for their respective franchise Mumbai Indians (MI) and Royal Challengers Bangalore (RCB) respectively. RCB is yet to win the IPL trophy but that doesn’t rule out the batting efficiency and leadership skills of ‘King Kohli’. Duminy also assigned the captain’s role to the current India skipper.

Following Kohli, Duminy picked his compatriot AB de Villiers followed by Kieron Pollard and Andre Russell in the allrounders’ slot. Russell was in stupendous form in the previous IPL as he smashed 510 runs at an average of 56.66. Similarly, Pollard also performed exceedingly well for Mumbai Indians by smashing 178 runs at an average of 34.87.

Coming on to the bowling attack, Duminy decided to go with two fast bowlers and two spinners. In the pace force of his all-time IPL XI, Duminy went with Brett Lee and Lasith Malinga. While one is known for his lethal pace, the other is known for his pinpoint yorkers.

To finish things off, Duminy slotted two veterans– Muttiah Muralitharan and Imran Tahir in his squad. Muralitharan, in his 66 IPL games, scalped 63 wickets at an economy below 7. In 55 IPL matches, Tahir has scalped 79 wickets including 3 four-wicket hauls. 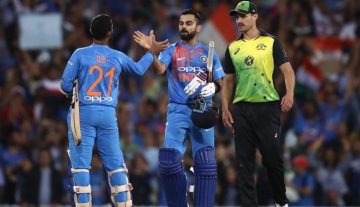