Australia head coach Justin Langer said that his team is desperately looking for a finisher in the team who can play like MS Dhoni or Michael Bevan in limited-overs cricket. Their three-match ODI series against New Zealand which will begin on March 13 which will give Australia an opportunity to test their depth in their middle order as well.

“We’ve been fortunate in the past with a Mike Hussey or a Michael Bevan who are masters at it. MS Dhoni is a master of it, Jos Buttler has been brilliant at it for England,” Langer was quoted as saying by ICC. “What I’ve learned is everyone in the world is looking for it.”

MS Dhoni has won India a lot of matches from a sure-loss position, and so did the likes of Bevan and Hussey in their respective teams. South Africa beat Australia by 3-0 in the recently-concluded ODI series where Mitchell Marsh played at number 6 in the second and third matches and scored 32 and 36 runs respectively for the team. However, Justin Langer feels that it is the right time to find the potential candidates to seal the finisher’s spot where the challenge will start with the upcoming ODI series against New Zealand.

Read here: Brett Lee Has a Say on Shafali Verma

Over the last year, as many as 13 batsmen have been tried and tested for the positions from 4 to 7 for Australia in One Day Internationals, with nine different batsmen tried out at No. 6 as well. All-rounders Glenn Maxwell and Marcus Stoinis occupied the spot in five matches each, but Stoinis, especially, failed to do his job, scoring just 27 runs in four innings. 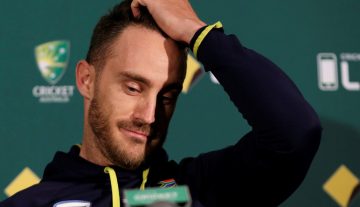