On Sunday, the fiery South African fast bowler, Kagiso Rabada, who is currently plying his trade for the Delhi Capitals in the Indian Premier League (IPL) 2021, proved why he is one of the great fast bowlers of the modern era as he knocked over ‘Universe Boss’ Chris Gayle after having been smoked over a mighty six.

The incident took place 6th over of the ongoing match between DC and Punjab Kings (PBKS) when Chris Gayle, in an attempt to make the most of the fielding restrictions, smoked a sharp, pacy bumper by Kagiso Rabada for a thumping six over deep-backward square-leg boundary.

However, Rabada made a phenomenal comeback as he knocked over Chris Gayle on the very next delivery. Rabada was probably aiming for a pacy yorker but he missed it by some fair distance as he dished out a sharp swinging full-toss. Expecting another sharp bumper from Kagiso Rabada, Gayle got himself into a position for another pull-shot but failed to defend teh balls, the ball swung from leg-stump at the very last moment and proceeded to make a mess of his middle and off-stump.

Gayle’s dismissal is the second wicket for Kagiso Rabada in as many overs. In his first over, he had managed to get the wicket of Prabhsimran Singh, who in an attempt to carve the South African bolter past extra-cover, ended up getting caught thanks to Steve Smith, who took yet another freakish catch.

Here is the video of the six:

Earlier, the DC skipper, Rishabh Pant won teh toss and decided to bowl first. While Delhi made now they in their squad. PNKs made a couple of changes as KL Rahul and Nicholas Pooran made way for Mayank Agarwal and Dawid Malan. 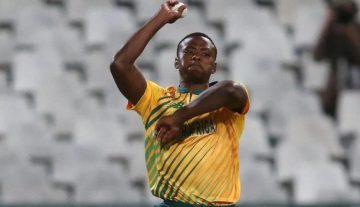 News
By CricShots - Oct 6, 2022
Kagiso Rabada Feels There Is Less Pressure For Him In ODIs