Trinbago Knight Riders skipper, Kieron Pollard has been known to make headlines not only with his game but also with his behavior. He did something similar during the match against St Lucia in the Caribbean Premier League (CPL). It was the 19th over of that innings. Wahab Riaz was bowling and the over lasted for 10 balls. New Zealand batsman Tim Seifert played a delivery that was outside the wide line of the off-stump.

The Kiwi wicket-keeper batsman tried his best to play it but the ball was really far away. The batsman and Kieron Pollard were surprised when the on-field umpire considered the ball to be correct and did not give a wide. However, Seifert did not even move outside the off-stump before the ball was bowled. Wahab Riaz had bowled four wides in the over.

Instead of debating the decision with the umpire, Pollard spoke a little and decided to protest quietly. He stands 20 yards towards the short midwicket. Pollard came pretty close to the 30-yard circle. He stood parallel to the crease for the last ball. Hee is the video of the incident:

Trinbago Knight Riders became the first team to play four matches. In the last season, Trinbago’s team did not lose any match in the previous season. However, this season, this team has to face defeat in two out of four matches.

Talking about the match, St Lucia team won the toss and decided to bowl. The pair of Kieron Pollard and Tim Seifert put on 78 runs for the fifth wicket to take their team to 158 runs for 7 wickets. Chasing a target of 159 runs, St Lucia’s team got derailed in the middle overs. Andre Fletcher was seen fighting alone. He scored an unbeaten 81. Eventually Trinbago team won the match by 27 runs. 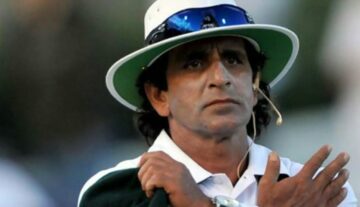