After West Indies registered an eight-wicket victory over India in the first ODI at Chennai on Sunday, West Indies captain Kieron Pollard praised Shimron Hetmyer how he has played.

“He has been in the team for the last 18 months so he has a taste of international cricket. As a management we are very happy about his knock, because we know the talent that he has. He has been struggling a bit in the last 9 months and he has been under a lot of pressure. We just want to make him understand about his role in the side. Everyone playing should be accountable and responsible as you are playing for your team,” he said.

West Indies did a good job with the ball in the first innings as they took some early wickets. Keemo Paul, Alzarri Joseph and Sheldon Cottrell shared two wickets each and Kieron Pollard praised his bowlers as well.

“Cottrell has a magnificent last 18 months. With experience comes confidence and Cottrell is bowling superbly for us. We have talent in the Caribbean, we just need to give opportunity to the players,” he told.

“I don’t know from where the power is coming from,” he said. “I am trying to hit as hard as I can. This ton means a lot to me. The last one I had was at the start of the year and this one came at the end of the year. It is always nice to have a smile on the face after the victory. It’s a good feeling because the last time, I got a hundred in India, we lost the game.”

Along with Hetmyer, Shai Hope too played well, who has been a key player of the last four ODI victories of the West Indies.

“I’m cramping a bit, that’s why I’m not smiling too much,” Shai Hope said. “The key is to stay as long as possible, see off the new ball, assess the situation. Key is for someone to bat deep, win the game, and that’s what we did.” 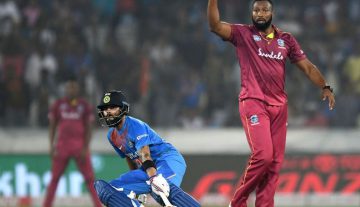