The Caribbean all-rounder, Kieron Pollard is a well-known name in the cricketing fraternity. He is known for his big-hitting and the fans also have witnessed a few instances of Pollard’s explicit emotions in the Indian Premier League (IPL). His display of emotions was once again evident in the ongoing Trinidad T10 Blast where he threw the ball at Nicholas Pooran, albeit hilariously.

During a game of the ongoing season of the Trinidad T10 Blast, the fans are witnessing a new avatar of Kieron Pollard as the all-rounder is bowling off-spin despite being known for his medium pace. Pollard and Pooran faced off in the Scarlet Ibis Scorchers Vs Leatherback Giants clash.

The century by Nicholas Pooran was the highlight of the match, however, the individual face-off between Nicholas Pooran and Kieron Pollard gained even more attention. Pooran was facing Pollard and tried to play a switch-hit. Being a cunning player, Pollard stopped in his bowling run-up as Pooran switched sides and pretended to throw the ball at the batsman, which he eventually did hilariously.

The all-rounder then attempted a mankad when Pooran was on the non-striker’s end, however, Pooran was well inside the crease. The show-off between the two West Indian players was hilarious, to say the least.

Pooran was in his scintillating best as he scored an unbeaten 101 in just 37 balls which ensured a comfortable nine-wicket win for his side. His quickfire inning was laced with 10 maximums and 6 fours and the batsman scored at a whopping strike rate of almost 273. The Leatherback Giants are in the 3rd position currently while the Scorchers are reeling at 5th. The Giants have won 3 out of their 5 games while the Scorchers have only registered one win in five contests. 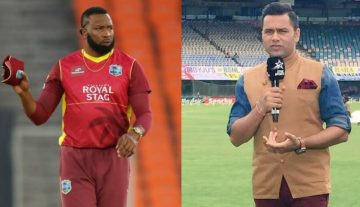