Australia and India recently locked horns in the three-match T20I series in Australia. The visitors won the final encounter at the iconic Sydney Cricket Ground by six wickets to draw level in the series. Krunal Pandya and the Indian skipper Virat Kohli were the major contributors in the Men in Blue’s triumph. While the Delhi cricketer scored his 19th T20I fifty, Krunal picked up a four-wicket haul.

India’s fielding was outstanding, to say the least. They took three outstanding catches and there was also one spectacular direct hit from Jasprit Bumrah to get rid of the swashbuckling Chris Lynn, who scored 13 runs from 10 deliveries with the help of one boundary. Bumrah isn’t known as the best in the business by any means as far as fielding is concerned, but he didn’t disappoint that day.

ALSO READ: Krunal Pandya Had To Convince Himself For His Performance

Bumrah thrashed the stumps down at the bowler’s end to get rid of the Queenslander in the 18th over, who could’ve inflicted some serious damage in the slog overs. The stupendous display in the outfield has highly impressed Krunal, so much so that he compared the lanky speedster with Jonty Rhodes, the legendary South African cricketer, who had redefined fielding in his own way during his playing days.

Following India’s memorable win, Bumrah took an interview of Krunal. A video of their interaction was shared by the Board of Control for Cricket in India (BCCI) on their official website. Bumrah commenced the interview, introducing himself and Krunal to the viewers.

Meanwhile, Krunal asked his teammate a question while hailing him as the new ‘Rhodes’ of Mumbai Indians. He said, “What were you thinking when you ran out Lynn at the non-striker’s end? (He is the new Jonty Rhodes of Mumbai Indians).” Replying to the same, Jasprit explained, “It’s not that, I had just lost my balance so I took my chance. It was good that in the end, it all worked out.” 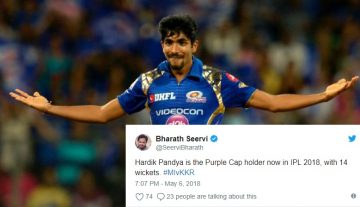