The New Zealand cricket team has witnessed significant progress over the last decade. Earlier, they would be the dark horses in cricket tournaments, but now, they often get considered favorites to win ICC tournaments. The Kiwis reached the final of the 2015 and 2019 Cricket World Cup, 2021 T20 World Cup, and won the ICC World Test Championship. But the country’s rising star Luke Georgeson has now shifted to Ireland.

It seems like the competition level in New Zealand cricket has been increasing each passing day, which is why it is difficult for any player to play international cricket for the Kiwis. Luke Georgeson played U-19 cricket for New Zealand, but now he has switched to Ireland.

Last year, the 22-year-old all-rounder was seen playing domestic cricket in Ireland. He has an Irish passport. He enjoyed the atmosphere in Northern Knights and Northern Union. Hence, when Cricket Ireland offered Luke Georgeson a contract, he could not decline as he bid farewell to Wellington Firebirds and New Zealand Cricket.

Luke Georgeson played for New Zealand U-19s in the 2018 edition of the ICC U-19 World Cup. He never played international cricket at the senior level for New Zealand. He played nine first-class matches, 11 List-A matches, and seven T20s in his career. The all-rounder now aims to represent the Ireland cricket team in the future.

ALSO READ: Ravindra Jadeja and MS Dhoni Argued Over A No-ball With The Umpire 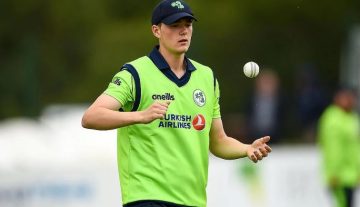