During the 4th match of the ongoing Indian Premier League (IPL) 2020 between Rajasthan Royals (RR) and Chennai Super Kings (CSK),  Lungi Ngidi bowled one of the worst over of his cricketing career as he got smashed for 27 runs in just two balls. Earlier in the wicket-keeper batsman, Sanju Samson scored adds another feather to his cap as he smashed his fastest fifty in their opening match. He brought up his half-century in just 19 balls with the help of 6 towering sixes and a sole boundary.

CSK skipper, MS Dhoni won the toss and asked the RR in to bat first. Samson’s fifty was his 11th in the IPL. After the earlier dismissal of young opener Yashasvi Jaiswal in the third over, Samson added as many as 121 runs for the second wicket along with Steve Smith. Samson was eventually dismissed for 74 off 32 balls by Lungi Ngidi in the 12th over, by then, the youngster had already done a lot of damage by then with RR’s score reading 2 for 132.

After the dismissal of Samson, Steve Smith carried forward the ship of RR but he also got out in the 19th over still Rajasthan reached a total of 187/7 in 19 overs. However, the final over of was nothing short of carnage from Jorfra Archer as he smashed as many as four sices in the over as along with Tom Curran he amassed 200 runs in the over as RR reached the total of 217/8 in their quota of 20 overs.

Here is the video of the carnage:

Jofra Archer all sixes in last over !!#IPL2020 #CSKvRR pic.twitter.com/iHOTOIoefK

On the first two balls of the over Archer smashed a couple of sixes to Ngidi and the next couple of sixes came on the no-balls followed by one wide which brought the tally to 27 urns in teh first two balls itself. However, Ngidi got his control back after that as he gave just singles on the last three balls. He has topped the list of bowlers who have bowled the most expensive last over in the history of the IPL. Earlier, bowlers Ashok Dinda and Chris Jordan have done the same.

However, in the second innings, something similar happened as in teh final over of the match MS Dhoni smashing three sixes on three consecutive deliveries off teh bowling of Tom Curran. However, it wasn;t enough as CSK eventually lost the game by 16 runs. Here is teh video of the same:

One of those sixes reached the streets outside teh stadium and a lucky man got the ball smashed by Dhoni. IPL posted the video of teh same on Instagram as they wrote: “That’s one lucky man who gets the ball that was hit by MS Dhoni for a mighty six 👀 #Dream11IPL #RRvCSK”.

Here is how Twitterati reacted to the carnage:

Archer’s unexpected assault in the final over will have left CSK psychologically bruised. dhoni would have thought they’d pulled themselves back into match after Samson’s blitzkrieg. Will take something extraordinary to win from here

JOFRA ARCHER to RR about last over : pic.twitter.com/1peTKiO1M5

Csk : all batsmen were out…
Archer: hold my beeer pic.twitter.com/hKfimUFyxO

Csk : all batsmen were out…
Archer: hold my beeer pic.twitter.com/hKfimUFyxO 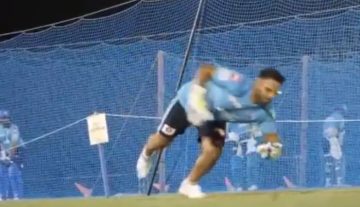