The Indian batsman and Karnataka skipper Manish Pandey got hitched with South Indian actress Ashrita Shetty on Monday. The first photo of the couple’s marriage was shared by the Indian Premier League (IPL) franchise Sunrisers Hyderabad (SRH) on Instagram. In the IPL, Manish plays for the SRH team.

Karnataka, under Manish’s captaincy, defeated Tamil Nadu in the final match of the Syed Mushtaq Ali Trophy on Sunday. He played the knock of 60 runs in this match. In the photo shared by the SRH, Manish can be seen wearing a sherwani, while Ashrita is wearing a silk saree.

According to the reports of mid-day, the wedding celebration will last for two days and the wedding will be attended by some close people from both the families. The wedding will take place in Mumbai, while Manish’s hometown is in Bangalore. He has played 23 ODIs and 32 T20Iss for India.

After winning the Syed Mushtaq Ali Trophy, the Karnataka captain had said, “We have won this trophy last year too, but this time the win is better. The way all the players performed throughout the tournament was fantastic. I cannot thank everyone separately, everyone gave their full contribution.”

He further added, “I felt that I should play with responsibility and I batted accordingly. After this, the Indian series will be watched. But tomorrow is a big series. I am going to get married tomorrow. “

26-year-old Ashrita works in the Tamil film industry. In 2012, she started her career with the film ‘Telikeda Bolli’. In 2010, Ashrita participated in a beauty contest that took place in Mumbai and won it as well. Apart from this, she has also worked in the Tamil films Udhayam NH 4, Oru Kanniyum Moonu Kalavanikalum, Indrajit and Naam Than Shiva. 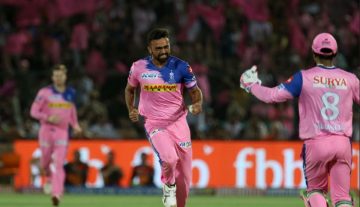