The veteran Indian batsman, Manish Pandey will soon be commencing new innings in his life and he expects to have found his soulmate. He is one of the top cricketing talents in the country and he is going to tie the knot with South Indian actress Ashrita Shetty on December 2 in Mumbai. Pandey is currently leading the Karnataka team in Vijay Hazare Trophy 2019-20.

Manish’s wedding will be taking place in Mumbai with Ashrita Shetty, a South Indian actress. There were strong rumors from very long that the duo was in a relationship but now it has been made official after the news of their wedding broke out in the media.

Ashira has now become a well-known face in the South industry. She had earlier featured in some big movies like Indrajith, Oru Kanniyum Moonu Kalavaanikalum, Udhayam NH4. Now, there are rife rumors that she is playing a lead role in an upcoming movie under the direction of R. Panneerselvam.

ALSO READ: Twitterati Erupts As A Virat Kohli Fan Askes Him To Play In Pakistan

As per the reports of mid-day, the marriage will be taking place in the presence of his close friends and relatives that is scheduled for two days. It looks like quite a few cricketers can take part on this special occasion on 2nd December 2019 in Mumbai because at that time Team India will also be in the city to lock horns with West Indies for a three-match T20I series.

Manish was the first Indian batsman to score a century in Indian Premier League and was considered as one of the most exciting talents but he had failed to prove his worth in the national squad. He made his international debut against Australia in an ODI series where he went onto play the best innings of his career. Pandey scored a match-winning ton in that match against Australia after which India remained successful in chasing down the highest score in that continent.

However, due to the strong performances given by the top order and decent contributions from the middle order, he lost his place from the team. But his impressive performances in domestic cricket and he eas recalled during India’s tour to West Indies after the conclusion of World Cup 2019. Currently, he has become an important part of Sunrisers Hyderabad due to his good display with the willow in IPL. 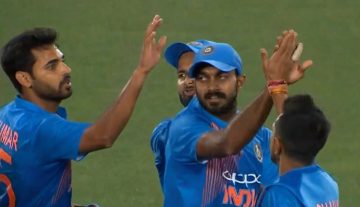