Kalra’s unbeaten innings of 101 is the fourth-highest individual score by a cricketer in the final of Under-19 World Cup. Kalra had also scored a half-century when India played Australia in their first group-stage match in the tournament. 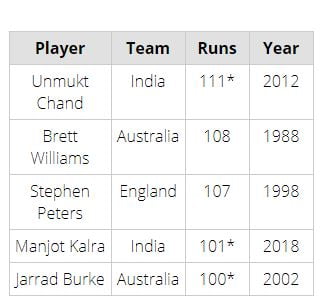 India restricted Australia with a below-par score of 216. Indian pacers Ishan Porel and Kamlesh Nagarkoti made sure Australia batsmen do not build any big partnership. Jonathan Merlo (76) was the only batsman to have scored a half-century in the innings. Chasing the target of 217, India was off to a strong start.

They lost their first wicket in form of skipper Prithvi Shaw (29) but Manjot didn’t lose his cool and made sure that India lifts the World Cup trophy. He then stitched partnerships with Shubman Gill (30) and Harvik Desai to take India over the line in the final. At the time of him reaching the century, India remained 3 runs away from winning the title.

Kalra was also named as the Man of the match for his stellar performance. India also became the first team to win the ICC U-19 World Cup four times