Videos
Marnus Labuschagne Made a Subtle Signal Of Bringing A Lighter On The Field
By CricShots - Jan 4, 2023 6:40 pm
Views 70

The Australian batter, Marnus Labuschagne is one of the most animated characters on the field and he was once again caught in a witty incident. Australia opted to bat first on the hard surface of SCG after winning the toss against South Africa in the final Test. They started off well losing just a single wicket in the first session. Marnus and Khawaja kept making a brilliant partnership of 126 runs for the second wicket by scoring half-centuries.

Marnus Labuschagne fell on an absolute crackerjack by Anrich Nortje just before bad light forced early stumps on day 1. Australia seems to be in the commanding position once again in this series and the possible whitewash is alive. Steven Smith and well settle Khawaja will be in the crease on Day 2 morning and they would like to 147/2 to around 500.

Labuscahgne never misses a chance to entertain the spectators with his funny character and he showed a glimpse of that in the 3rd Test between Australia and South Africa. The 28-year-old was having some issues with his helmet which caused a distraction to him while batting.

The batter immediately signaled towards his dressing room for assistance. The thing which made fans hold their stomach while laughing was his gesture. Instead of asking for a new helmet, Marnus asked for a cigarette lighter to do the repair work for his helmet.

The incident was caught up in the camera and everyone couldn’t stop laughing at the first sight including the commentators. The world number 1 hasn’t been at his very best in this series before the third test. In the third test, Marnus showed his class and tackled the Protea pacers brilliantly. He was controversially given out during the 40th over but it was overturned by the TV umpire later.

Labuschagne made 79 off 151 deliveries he faced before nicking one of his bat’s shoulders straight onto the keeper thanks to Nortje’s valiant effort. Just after the dismissal of Marnus, the play stopped due to bad light and after a period of time, the day was called off. 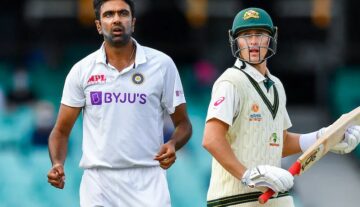