There was a controversial incident during the second T20I between Australia and England, wicket-keeper batter, Matthew Wade was caught obstructing England’s pacer, Mark Wood while trying to return to his crease after hitting a ball high in the air, as the bowler was trying to take the catch. The incident happened on the 3rd ball of the 17th over, when Mark Wood hurried Wade with a sharp short ball, which the left-hander top-edged onto his helmet.

Mark Wood tried to go for the catch in his follow-through, but Matthew Wade put his hand out to stop the pace from making a full attempt as he dived into his crease. This led to both Wood and England skipper, Jos Buttler asking questions from the umpire over what Matthew Wade did. The two umpires conversed for a bit, but in the end, Wade wasn’t declared out.

Meanwhile, England was asked to bat first after losing the toss, and thanks to 84 from Alex Hales and 68 from Jos Buttler and their 132-run partnership in 11.2 overs, the visitors managed to reach a total of 208/6 in 20 overs. Nathan Ellis picked 3/20 in his four overs.

On the other hand, chasing 209 to win, Australia lost the game by 8 runs as they managed 200-9 in 20 overs. Furious fans took to social media to share their reactions. David Warner slammed 73 runs, while Mitchell Marsh (36) and Marcus Stoinis (35), along with Matthew Wade (21), kept Australia in the game till the last over when 16 runs were needed. In the end, they finished on 200/9 and lost by 8 runs.

But Australia did not escape its fate. Sam Curran managed to defend the score of 16 runs required of the hosts in the last over as England won by eight runs.

“I was looking at the ball the whole time so I wasn’t sure what happened. They asked if I wanted to appeal, but I thought we are here for a long time in Australia so would be a risky one to go for so early in the trip,” Buttler later explained why England did not appeal.

Wade literally stopped Wood from trying to catch that, it's most definitely obstruction of field, should've been out. Shit sportsmanship from Aussies. Abysmal#AUSvENG #ENGvAUS

Aussies doing what they do best…cheat#AUSvENG 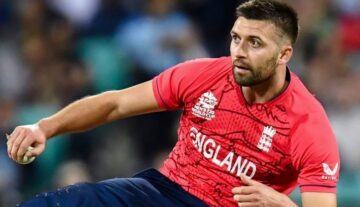 News
By CricShots - Nov 8, 2022
Mark Wood Will Be Undergoing Fitness Test Ahead Of The Semi-final Clash