Australia’s former Test skipper, Tim Paine will be making a comeback to the Big Bash League (BBL) after Hobart Hurricanes named him as a replacement for Matthew Wade for Saturday’s fixture against Melbourne Renegades at Blundstone Arena in Hobart. It will mark wicket-keeper batter Paine’s BBL comeback in almost five years.

The 34-year-old Tasmanian man was charged with “two instances of an audible obscenity” as well as “one instance of abuse of cricket equipment”. Earlier this month, Matthew Wade faced criticism for yelling “bowled” just before Faf du Plessis, the Perth Scorchers batter, played a shot. It resulted in the dismissal of the former South Africa captain. An annoyed Du Plessis gave a death stare to Wade in anger, as the latter burst into a celebration with his teammates.

Matthew Wade will miss the Hurricanes’ match against the Renegades today due to using an “audible obscenity” twice in 18 months. Is it just me or is this a farce? pic.twitter.com/FTVqXbMkEJ

Wade’s suspension has opened up an opportunity for former Australian captain Tim Paine to make a comeback into the squad. The Hurricanes roped in Paine for the match despite the presence of top-order batter Ben McDermott, who seems the main contender to both take the gloves and the captaincy in Wade’s absence.

Time Paine last played for the Hurricanes on February 4, 2018, against Adelaide Strikers. The 38-year-old had stepped down as Australia’s Test skipper after the Brisbane Test against India in January 2021 as he was in the middle of a sex tape scandal. 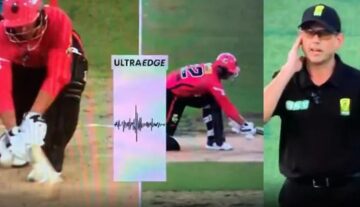 Videos
By CricShots - Feb 3, 2023
Third Umpire Gave Contrasting Decision On A Delivery In A BBL Match