The young Indian leg-spinner, Mayank Markande was in his prime form against the England Lions with an impressive 5/31 to help India A register a comprehensive win by an innings and 68 runs within three days in the second and final unofficial Test, in Mysore. However, the day just got better for the youngster as he was included in the Indian T20I side which will face Australia in the two-match series from February 24.

But the India call-up was a surprise for the youngster who has been in impressive form over the past few months. Markande said, “Get a national call-up is the biggest achievement in a player’s career. To be honest I was not expecting this. I did not think I would get included the national set-up this early. I consider myself really lucky.”

The last one year has been “amazing” for Markande where he played 7 first-class matches and ended up scalping 34 wickets at an average of 21.26 (including three five-wicket hauls.) But he attributes his India call-up to years of hard work.

Talking about the same, Mayak said, “My performances in the Ranji Trophy along with meaningful performances for India A must have been noticed by the selectors. and I am really happy that they have given me a chance to prove myself.”

Born and brought up in Bathinda, Markande was earlier a fast bowler and had mastered the art of bowling the back-of-the-hand slower delivery but then his coach suggested he could be a more effective leg spinner. Hence, he converted Markande’s slower ball into a fine googly- a decision which reaped huge rewards.

Markande made his under-16 debut for Punjab in the Vijay Merchant Trophy during the 2013-14 season. In seven games he bagged 29 wickets at an impressive average of 18.24.

However, what caught everyone’s attention was his debut for Mumbai Indians in IPL 2018 when he trapped MS Dhoni LBW for a duck. In a memorable season, he was the leading wicket-taker at one point in IPL 2018 before ending with a tally of 15 wickets at an average of 24.53 (including one four-wicket haul).

When asked how what role the IPL had played, Markande said, “I have gained maximum exposure from IPL and since I got the break in IPL my game has improved. Sharing the Indian dressing room with Rohit Sharma will be special. He had motivated me a lot during the IPL. I always kept talking to him. He is a legend of the game now so I always try to learn as much as possible from him.”

When asked what he will be looking forward to incasing he is handed the India cap, Mayank revealed that getting into the playing XI isn’t one of the things he is thinking of, but he gets a chance, then having MS Dhoni keep for him will be special.

The atmosphere in Markande’s hometown is also full of festivity where his father is an inspector working with Punjab State Power Corporation Limited (PSPCL) in Patiala and the mother runs a clothing boutique. He explained, “I told my parents today evening and they are all in a celebratory mood. I am really looking forward to meeting them and celebrate the occasion.” 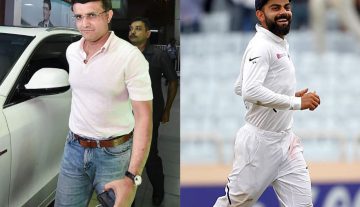 News
By CricShots - Nov 25, 2019
Gavaskar Takes A Dig At Kohli For Praising Ganguly