Mithali Raj is one of the best women cricketers the world has ever seen. She holds several records in the women cricket and whenever she bats, she hardly disappoints her fans. Often, she is regarded as Sachin Tendulkar of women’s cricket. At the moment, she is playing limited-over series in New Zealand, where she contributed to Team India’s ODI series victory against the hosts.

In the first of three-match series, Raj didn’t get an opportunity to bat as Indian openers chased the target down. While in the second game, she made most out of the given opportunity and scored 63 at Bay Oval in Mount Maunganui. However, in the third and final game of the series, her bat failed to rescue India’s ship as it sank for just 149 runs.

Despite failing with the bat, she unearths a new ground during the third One-Day International against New Zealand. It was her 200th appearance in an ODI game and became the first women player to reach the landmark. In 2017, the 36-year-old became the table-toppers of the highest run scorer in the ODI format before touching an elusive 6,000 ODI run mark. However, she failed in the all-important final of the ICC Women World Cup 2017 against England and India returned with being the second best team in that tournament.

At the moment, she is in the twilight of her career but still is good enough to break records. Mithali just broke Virat Kohli’s record and took fewest innings to complete 2,000 T20I runs. Holding these many records, it doesn’t surprise that she has a fan base in every part of the world. Among the millions of them, there is a young one too. It is Shikhar Dhawan’s son Zoravar Dhawan.

Aesha Dhawan, Shikhar’s wife, uploaded one photo of Mithali hugging Zoravar, where she captioned “Mithali Raj has a little fan #zoraverdhawan! One of my favourite pics and we always supporting the Women’s Indian Cricket Team!!!!! #lovethispic#womenscricket #fan.”

@mithaliraj has a little fan #zoraverdhawan! One of my favourite pics and we always supporting the Women’s Indian Cricket Team!!!!! #lovethispic #womenscricket #fan 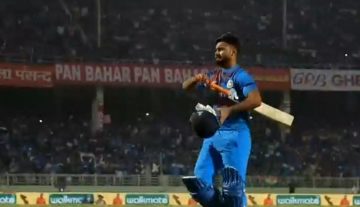