Former Australian skipper, Michael Clarke is an admirer of the Indian skipper, Virat Kohli. He believes that Kohli plays two roles for India, one as a skipper and the other as a batsman and it would be difficult for the visitors to find a replacement for Virat in the last three Test matches of the four-match series against Australia.

Kohli will be missing the last three Tests against Australia as he would be traveling back to witness the birth of his first child along with his wife Anushka Sharma. Michael Clarke believes that it would be no less than a miracle and Team India should celebrate for a year if they manage to stamp their authority in the Tests without Virat Kohli.

Clarke reckons that nobody can fill in Kohli’s boots but it can also be an opportunity for India to give opportunities to new cricketers and test them in Australian conditions. According to the former Australian skipper, KL Rahul can be a good option to bat at no. 4 positions in Tests in the absence of India captain while Ajinkya Rahane should don the captaincy hat.

Michael Clarke said, “There are probably two sides to Virat, one is the captaincy part and the other is the batting part. Who is going to bat in place of Virat. KL Rahul is very talented, there is no doubt about it. I think he is experienced, playing in these conditions before. He can do it.”

As per the quotes in India Today, he further added, “But Virat Kohli’s boots can never be filled by anybody. I love Jinx (Rahane). He is a great player. His captaincy is pretty good. Tactically, he is a very good captain and it’s going to be good for India. You have got to see it as an opportunity. You have got to try and create history.”

Further in the interaction, Clarke reckoned that Team India should celebrate for a whole year if they manage to win the Test series while Kohli will be missing the series. Also though he reckons that it would be an impossible task, the visiting players should have faith in themselves.

Clarke elaborated, “If India can beat Australia at Australia’s own backyard without Virat Kohli, you can celebrate for a year. That will be an unbelievable win. I think that’s the way Indian players have to look at it. They have to believe they are good enough to take on and beat this Australian team.” 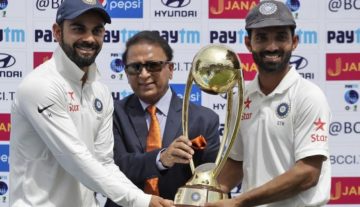