In the first qualifier of the Legends League Cricket 2022, India Capitals managed to chase down 227 runs against Bhilwara Kings. Many heroes came out in this match, but when the Bhilwara team was batting, there was an incident was seen which spoiled the fun of this match and it was the altercation between Mitchell Johnson and Yusuf Pathan.

During the incident, Yousuf’s younger brother Irfan also kept watching at the other end. After this, when Johnson crossed the limit, Yusuf could not stay and he clashed with Johnson and there was a scuffle between the two. First Yusuf lost his cool, as he pushed Johnson and then Johnson also did not pull his hands back and he also pushed Pathan. If the umpires had not come in between, then this matter could have become more serious.

The video of this incident is becoming increasingly viral on social media and fans are trolling Mitchell Johnson a lot after seeing his attitude. At the same time, if we talk about this match, then Ross Taylor’s 84 runs in 39 balls proved to be decisive and he gave Gautam Gambhir’s team victory.

Some heated moments between Johnson and Pathan during @llct20 knock-outs. pic.twitter.com/xQR3PtsWuY 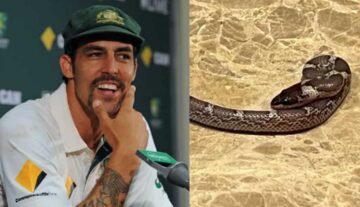