With the international matches being played behind closed doors with no fans in the stadium and the number of ground personnel being reduced, cricketers are facing a new problem. In every match, it has often been witnessing sudden pauses as fielders are now required to fetch the ball from the empty and distant stands. However, in the first ODI played between England and Australia in Manchester, the Australian all-rounder, Mitchell Marsh had to take a long walk to the parking lot to fetch the ball.

A similar incident was witnessed in the recently concluded Caribbean Premier League (CPL) 2020 when in the tournament opener, fielders were seen racing back to the empty and distant stands to fetch the ball.

However, Mitchell Marsh was splendid with the bat when he had amassed as many as 73 off 100 deliveries and helping Australia post a challenging 294/9 for the England team to chase down in the second innings. Marsh along with the veteran all-rounder, Glenn Maxwell stitched a crucial partnership of 126 runs for the sixth wicket.

ALSO READ: KKR Mentor Reveals Their Plans To Use Sunil Narine In IPL 2020

While chasing the total, the hosts had witnessed a poor start with England hanging at 57/4 with Josh Hazlewood doing the early damage. Jonny Bairstow and Sam Billings managed to produce a decent fight back, but the hosts fell 19 runs short from winning the contest. 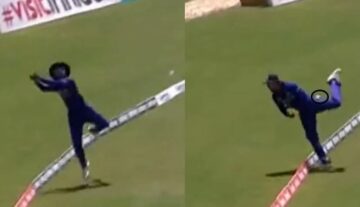 Videos
By CricShots - Jul 30, 2022
Shreyas Iyer Pulled-off A Superman Effort To Save A Six