On Tuesday, Australian pacer Mitchell Starc shared that the feels cricket will become “pretty boring”  if the bowlers aren’t given any substitute to replace saliva for shining the ball.

As the CoronaVirus spreads through the medium of spits and droplets, ICC is set to ban the practice. Shining the ball is an integral part of bowlers as it helps them swing the ball both ways. It is a traditional practice for the bowlers to use saliva to shine the ball. Swinging the ball helps contest and even out the game which is turning more and more batting-friendly with changes in rules.

Speaking in an online press conference, Starc said,  “We don’t want to lose that or make it less even, so there needs to be something in place to keep that ball swinging. Otherwise, people aren’t going to be watching it, and kids aren’t going to want to be bowlers.

The 30-year-old added, “In Australia, in the last couple of years we’ve had some pretty flat wickets. If that ball’s going straight it’s a pretty boring contest.”

ICC cricket committee Chairman Anil Kumble revealed that the saliva ban is only an interim measure. He also revealed how the ICC doesn’t prefer to allow the use of foreign substances to shine the ball.

ALSO READ: Prithvi Shaw Reveals the Privilege of Having Tendulkar as ‘Mentor’

Start feels the bowlers should be given a leeway somewhere else if their advantage of using saliva is banned. He said,  “It’s an unusual time for the world.  If they’re going to remove saliva shining for a portion of the time they need to think of something else for that portion of time as well. (Either) with the wickets not being as flat or at least considering this shining wax.”

Australian cricket ball manufacturer Kookaburra is developing a wax applicator that allows players to shine the ball without using saliva. 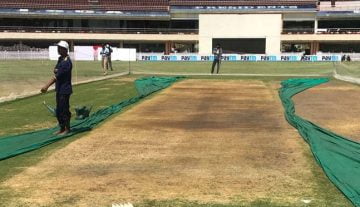