Videos
Mohammad Amir Takes A Revenge From Avishka Fernando After Getting Hit For A Six
By CricShots - Dec 23, 2021 12:52 pm
Views 2.7K

Interestingly both the teams of the first qualifier will face each other again in the final. In the tournament, Jaffna Kings has won 6 games out of 8 games played which are the most wins among other teams. Galle Gladiators and Colombo Stars have won 4 games each out of the 8 games both played. But with a better net run rate, Galle Gladiators qualified for the knockout games. In the second qualifier, Dambulla Giants won the toss and decided to bowl first.

After losing Qualifier 1 to Galle Gladiators, the pressure was on the Jaffna Kings. With the advantage and winning momentum Dambulla Giants’ decision to bowl first completely backfired as Jaffna Kings had added 122 runs on the board in just 14 overs with some pure class batting from Avishka Fernando and Rahmanullah Gurbaz (70).

In the 20 overs, Jaffna Kings posted 210 runs for the loss of 4 wickets. Avishka Fernando (100) and Rahmanullah Gurbaz (70) contributed majorly. Chasing 211, Dambulla Giants has added on 39 runs in just 3.3 overs. But the wicket of Philip Salt has changed the perception of the match completely. Though Chamika Karunaratne played unbeaten innings of 75 runs there was no support from another end to chase the target. Dambulla Giants scored 187 runs in their allotted 20 overs.

Before the second Qualifier, Jaffna Kings had played against Galle Gladiators in the first qualifier. Batting first, Galle Gladiators posted 188 runs in their allotted 20 overs. Kusal Mendis (85) and Danushka Gunathilaka (55) innings helped his side for a big score.

Chasing 189 runs, Avishka Fernando sent the first ball for six of Mohammad Amir. But the next ball Amir ripped off the stumps of Fernando with an inswinger. Brief scores: Jaffna Kings 210 for 4 in 20 overs (Avishka Fernando 100, Rahmanullah Gurbaz 70) beat Dambulla Giants 187 for 9 in 20 overs (Chamika Karunaratne 75 not out; Jayden Seales 3/24) by 23 runs. 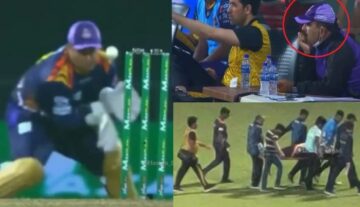 Twitter Reaction
By CricShots - Dec 13, 2022
Azam Khan Suffered A Blow On His Head After The Slower Ball From Nuwan Pradeep