Earlier in 2017, young pacer Mohammed Siraj was bought by Sunrisers Hyderabad in the Indian Premier League auction and from the very day he got his IPL contract, the medium pacer asked his father, who was an autorickshaw driver, to stop working.

Just at the age of 23, Siraj has now been picked up for the India T20I squad that will take on New Zealand in a three-match series. During a recent interview with PTI, the young pacer expressed his excitement for the call-up, he said, “I feel proud that at 23, I am good enough to shoulder the responsibility of my family. The day I got an IPL contract, I told my father that I won’t let him work anymore. Usi din se maine father ko bola ki aap abhi rest kaaro (that very day I told Dad that now you can rest). And yes, I have shifted with my family to a new house.”

Siraj also acknowledged that he was expecting an international call-up for India team but not as early as this. He said, “I knew that sometime in future I will get a call-up but did not expect it this soon. I can’t tell you how happy I am. When I told my parents, they were speechless. It’s a dream come true.”

Siraj played under bowlers like Bhuvneshwar Kumar and Ashish Nehra in IPL 2017 and now he will be replacing Nehra in the NZ series. He credited Bhuvi and Nehra for their encouragement, especially regarding his bowling. He concluded, “Bhuvi bhai encouraged me a lot during IPL. He would come up with lot of valuable suggestions on what areas to hit at the death, the lengths for particular batsmen. Dravid sir told me that I need not change anything in my bowling. His advice has been pretty simple. Do what has got you success till now. Hopefully, I can replicate my success at the highest level.” 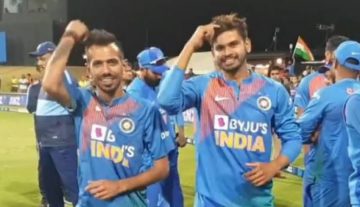